Jammu and Kashmir and Ladakh High Court: While deciding the instant appeal wherein substantial questions of law were raised vis-a-vis SectionS 80, CPC; the Single Judge Bench of Vinod Chatterji Koul, J., held that the language of Section 80 is very clear in stating that at the time of filing a suit, if the plaintiff can establish that there is an urgency to seek relief, then the Court on its satisfaction, may dispense off with the requirement of notice before filing a suit under Section 80.

Facts and Legal Trajectory of the case: The Chief Medical Officer, Pulwama, issued advertisement on 06-02-2012 inviting applications from eligible candidates of District Pulwama, for the posts of Female Multipurpose Health Worker (hereinafter FMPHW) for Sub Centre Amlar. The advertisement was issued under the National Rural Health Mission (NRHM). The prescribed qualification was Diploma in FMPHW and that the candidate should be resident of the locality where the Health Institution is located so as to ensure continuous presence for 24 x 7 days’ service.

In pursuance of the afore-stated advertisement, the appellant and the respondent applied for the post. The appellant was appointed on 19-05-2012 as FMPHW at Sub-Centre Amlar, Block Tral, and joined her duties on 21.05.2012. The respondent, however filed a suit seeking to declare the appellant’s appointment null and void as the officials acted in derogation to the rules and guidelines as stated in the advertisement and were under a mistaken assumption in considering Nowpora as a village. The Trial Court held that the appointment of the appellant was illegal.

The Substantial Questions of Law in this case: The Court while considering the instant appeal, framed the following questions of law-

Observations and Decision: While deliberating upon questions framed, the Court observed that Questions I and II are interconnected as they require consideration of S. 80, CPC.

G. A. Lone, & Mujeeb Andrabi, Advocates, for the Appellant; 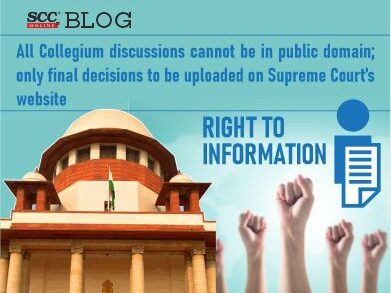 All collegium discussions can’t be in public domain; only final decisions to be uploaded on SC website: SC