Calcutta High Court: Shampa Sarkar, J. disposed of a writ petition with certain directions to police authorities in relation to an investigation in lieu of protection of animals.

Petitioners are members of the Kalyani Bar Association. They filed a complaint that a piglet which had been rescued and brought up by them, was forcefully taken away by some miscreants. It was alleged that four unknown persons entered the Court premises in a swift desire and forcefully took away the animal.

It was noted that the entire incident was video-graphed in a mobile phone by a security guard and forwarded to the police. It was further urged that forceful removal of the animal from its familiar surroundings and from the custody of the persons who looked after it, amounted to cruelty and it should have been incorporated in the FIR.

The Court found substance in the contentions of the petitioner and opined that the police authorities ought to have conducted the enquiry with more seriousness. It was further opined that although, the statements of the security guards were recorded under Section 161,Criminal Procedure Code, whether attempts were made to track down the accused persons, do not reflect from the report. The Court dissatisfied by the investigation stated that from the photographs clicked by the security guards, the identity of the miscreants could have been ascertained.

The Court clarified that the paramount consideration in this investigation should be to protect the interest of the animal, apart from protection/security of court compound. Well-being of animals has been statutorily recognized. The right to get protection from unnecessary pain or suffering, is a right guaranteed to the animals under Section 3 and Section 11 of the Prevention of Cruelty to Animals Act, 1960 (PCA Act) read with Article 51-A(g) and (h) of the Constitution of India.

The Court further relied on Animal Welfare Board of India v. A. Nagaraja, (2014) 7 SCC 547 where it was observed that freedom from fear and distress are recognized as a right in case of animals. Thus, when the pig was forcefully removed from its surrounding by unknown persons, the rights guaranteed, have been violated.

Consequently, the Court was of the view that Superintendent of Police shall supervise the investigation henceforth and take necessary steps in this regard. It was reiterated that it is to be kept in mind that it is fundamental duty to protect the animals, from cruelty. This is not a case that the civic body had removed the animal, for maintenance of hygiene etc. Further, the police authorities were directed to keep a strict vigil towards the security of the Court compound so that no such incident was repeated. 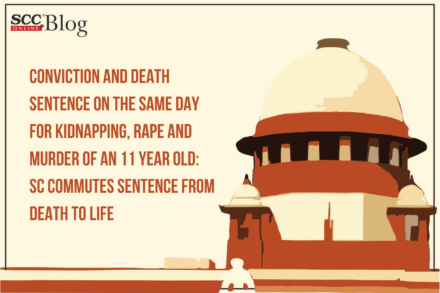 Conviction and Death Sentence on the same Day for kidnapping, rape and murder of an 11 Year Old: SC commutes sentence from death to life