Uttaranchal High Court: The division bench of Sanjaya Kumar Mishra, acting C.J., Ramesh Chandra Khulbe, J., held in the writ petition is maintainable, as the cancellation of GST registration affects the rights of livelihood enshrined under Article 21 of the Constitution of India.

The division bench observed that in absence of a GST registration number, a professional cannot raise a bill which affects the chances of getting employment or executing works. Such denial of registration, therefore, affects the right of livelihood that is violative of Article 21 of the Constitution. If the situation so prevailing continues, then it will not only amount to a violation of Article 21 but also the right to life of a citizen of this country.

The petitioner is a working mason/ painting professional who applied for GST registration and the registration no. was allotted to him but, hee failed to file his return for a continuous period of six months which was mandatory under the Uttarakhand Goods and Services Tax Act, 2017. Hence, his registration got canceled on 21-09-2019.

The petitioner preferred an appeal before the First Appellate Authority which got dismissed on the grounds of delay. Thereafter, a writ petition was filed which was also dismissed as not maintainable by the Single Judge. It was observed in the writ petition that an alternative remedy of appeal was available to the petitioner under Section 107 of the Uttarakhand Goods and Services Tax Act, 2017. Aggrieved by the order of the Single Judge, the petitioner filed this intra court appeal.

1. Whether a writ petition is maintainable when the limitation period provided for filing an appeal is not extendable?

2. Whether the Assistant Commissioner of GST, whose order is challenged in this case, is an adjudicating authority, or not?

The Court observed that the law made by the Parliament regarding appeals is very strict. It was pointed out that the law does not grant the First Appellate Authority to extend the limitation beyond one month after the expiry of the prescribed limit due to which the petitioner is put to hardship and left with no remedy.The Court noted that a notice was given on the website regarding the cancellation of GST registration which was not sufficient and a personal notice was supposed to be given. . The Court while allowing the appeal and remanding the matter back said that the petitioner is a semi-skilled labourer and now-a-days bills for any work executed for a private player or, even for the Government agency, are drawn on-line. In most cases, the payments are made direct to the bank on production of the bill with the GST registration number. In the absence of GST registration number, a professional cannot raise a bill. So, if the petitioner is denied a GST registration number, it affects his chances of getting employment or executing works. Such denial of registration of GST number, therefore, affects his right to livelihood. The Court relied on Radha Krishan Industries vs State of Himachal Pradesh, (2021) 6 SCC 771,

wherein it was held that a Commissioner is not an adjudicating authority, hence an appeal will not lie against the orders passed by him under Section 107 of the Uttarakhand Goods and Services Tax Act, 2017. The Court, hence, set aside the order by learned Single Judge and held that the learned Single Judge has committed error by holding that the writ petition is not maintainable. 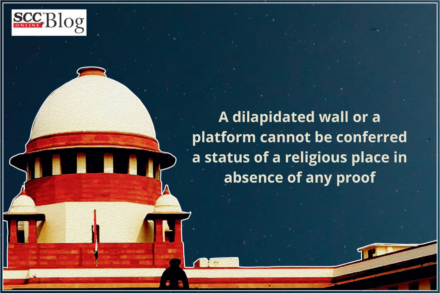 Dilapidated structure on Bhilwara’s Tiranga Hill cannot be conferred a status of a Mosque in absence of any proof; Jindal Saw to go ahead with mining: SC