Telangana High Court: The Division Bench of P. Naveen Rao and Sambasivarao Naidu, JJ. allowed the appeal and set aside the impugned order holding a dispute arising out of an agreement concerning immovable property which is exclusively used in trade or commerce and whose ‘specified value’ is more than one crore is a commercial dispute and must be tried in a commercial court only.

The first respondent (R1) and the Appellant entered into Lease agreement with respect to property called as “Durgam Cheruvu Eco Tourism Deck and Party Area” for a period of ten years. However, the differences arose regarding taking over possession of the subject property and payment of lease amount. The Department for Youth Advancement and Culture, on request, granted R1, waiver of rent for a certain period, and R1 further claimed additional waiver from appellant vide representation, which was rejected, and strained relationships further, resulting in both taking recourse to arbitration for settling disputes vide Clause 10 Lease Agreement. An application under Section 9 Arbitration and Conciliation Act, 1996 was filed before ACJ City Civil Court seeking interim protection. The city civil court granted interim injunction in favour of R1 subject to deposit of monthly payments. Assailing this order, a present appeal was filed.

The appellant contended that since the transaction is commercial in nature and monetary value of the disputed property is above One crore , the ordinary Civil Court has no jurisdiction and the individual has to seek remedy under provisions of Commercial Courts Act, 2015.

The respondent submitted that only disputes which are of commercial nature must be resolved by the Commercial Court. In the present case, it was a lease agreement and not all contracts are commercial in nature. Besides, no commercial activity had commenced on the property due to which the dispute is not a commercial dispute and hence not maintainable before the Civil Court.

The Court observed that on a cumulative reading of Sections 2(1)(c)(vii), 10 and 12 Commercial Courts Act, 2015, it is apparent that if a dispute arising out of an agreement concerning immovable property which is exclusively used in trade or commerce and whose ‘specified value’ is more than one crore, then, it is a ‘commercial dispute’ and only the commercial Court has jurisdiction to deal with application filed under Section 9 of the Arbitration and Conciliation Act, 1996.

The Court further noted that from the clauses of the lease agreement, it is evident that the appellant earlier granted lease of the schedule property to another lessee for the very same purpose and said lessee built certain, tents, structures, fixtures, and micro-brewery. Disputes arose between earlier lessee and appellant and litigation is pending in the Courts. The terms of the lease agreement clearly indicate that the suit schedule land was already used for commercial purposes by an earlier lessee. Therefore, Section 2(1)(c)(vii) Commercial Courts Act, 2015, is attracted and dispute inter se between the appellant and the respondents is a commercial dispute.

The Court thus held “It is not in dispute that arrears of rent were more than two crores. Therefore, the ‘specified value’ of the subject dispute is more than one crore and in view of specific provision in Section 10 read with Section 12 of the Commercial Courts Act, 2015, application under Section 9 of the Act, 1996 must be filed in a designated Commercial Court only and Civil Court has no jurisdiction to deal with such applications” 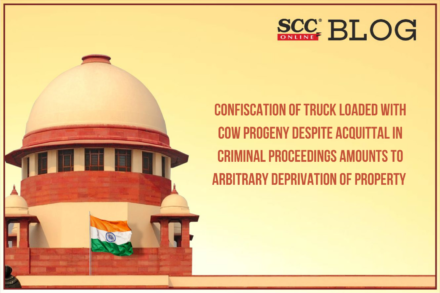