Supreme Court of Canada: A full bench comprising, Wagner C.J. and Moldaver, Karakatsanis, Côté, Brown, Rowe, Martin, Kasirer and Jamal JJ unanimously ruled that imposing consecutive sentences under Section 745.51 of the Criminal Procedure Code, violates Section 12 of the Canadian Charter of Rights and Freedoms. It was observed that “Not only do such punishments bring the administration of justice into disrepute, but they are cruel and unusual by nature and thus contrary to s. 12 of the Charter. They are intrinsically incompatible with human dignity because of their degrading nature, as they deny offenders any moral autonomy by depriving them, in advance and definitively, of any possibility of reintegration into society.”

Facts and contentions of the case:

On January 27, 2019, Alexandre Bissonnette opened fire on the worshippers that were gathered in the Great Mosque of Québec for evening prayer. Six people were killed and five were seriously injured. He pleaded guilty to all charges against him, including six counts of first degree murder.

According to the Canadian Law, a person who has committed murder will be sentenced minimum to life imprisonment and would be eligible for a parole after 25 years of period of ineligibility.

The State pleaded for the imposition of Section 745.51 as the accused had committed multiple murders. This provision allows the periods without eligibility for parole for each murder conviction to be served back-to-back (consecutively). Bissonnette challenged the constitutional validity of the section. The trial court made an attempt to provide remedy for the provision by bear reading it and granting the courts to choose an additional period of ineligibility for 40 years before applying for parole. The court of appeal declared the provision unconstitutional and held that the accused serve a 25-year parole ineligibility period on each count before being able to apply for parole.

Observations made by the Supreme Court

While dismissing the appeal filed against this judgment of the Court of Appeal, the Supreme Court made the following observations:

Everyone would agree that multiple murders are inherently despicable acts and are the most serious of crimes, with consequences that last forever. This appeal is not about the value of each human life, but rather about the limits on the state’s power to punish offenders, which, in a society founded on the rule of law, must be exercised in a manner consistent with the Constitution.

Along with the aforementioned observations, the court pointed out that the Parliament may not prescribe a sentence that negates the objective of rehabilitation in advance, and irreversibly, for all offenders. The penological objective is intimately linked to human dignity, that every individual has the capacity to reform and re-enter the society. In the light of this conclusion, the Court unanimously declared section 745.51 invalid from the time it was enacted in 2011. Resultantly, the law that existed before the date will continue to apply.

Explained: Maintainability of counter claims in arbitration proceedings under Section 18(3) of the Micro, Small and Medium Enterprises Development Act, 2006 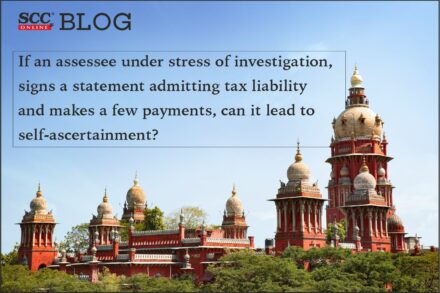 If an assessee under stress of investigation, signs a statement admitting tax liability and makes a few payments, can it lead to self-ascertainment? Madras HC explains