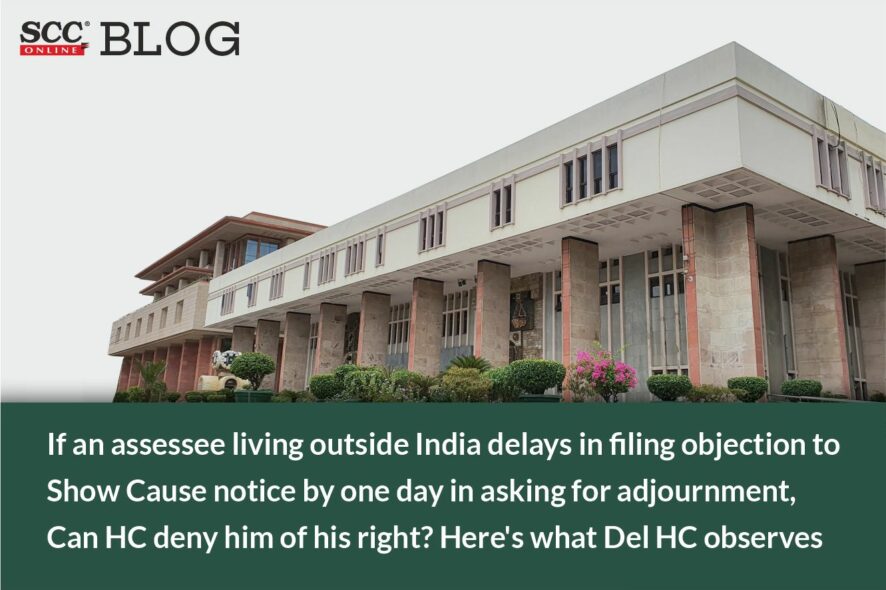 Delhi High Court: The Division Bench of Manmohan and Manmeet Pritam Singh Arora, JJ., expressed that, merely because there was a delay of one day in asking for an adjournment, the assessee living outside India cannot be denied his Right to file an objection to Show Cause notice.

Petitioner’s counsel submitted that the impugned order had been passed without considering the petitioner’s request for adjournment dated 9-4-2022 as well as 12-4-2022 and a detailed reply dated 13-4-2022 to the show cause notice.

Respondents- revenue stated that the adjournment request had not been filed within the stipulated time and therefore, the Assessing Officer was well within its right to pass the order under Section 148A(d) of the Act.

The High Court stated that the petitioner-assessee has a right to get adequate time in accordance with the Act to submit its reply.

“Section 148 A (b) permits the Assessing Officer to suo moto provide up to thirty days period to an assessee to respond to the Show Cause Notice issued under Section 148A(b), which period may in fact be further extended upon an application made by the Assessee in this behalf, and such period given to the assessee is excluded in computing the period of limitation for issuance of notice under Section 148 of the Act in terms of the third proviso to Section 149 of the Act.”

High Court remarked that since the petitioner-assessee was a resident of the United States of America, the Court was of the view that the delay of one day in asking for an adjournment should not have led to the closure of the right to file a reply to the Show Cause Notice.

The Bench quashed the impugned orders and directed respondent 1 to pass a fresh reasoned order under Section 148 A(d) after considering the reply filed by the petitioner. [Ernst and Young U.S. LLP v. ACIT, 2022 SCC OnLine Del 1529, decided on 20-5-2022]

NGT | Crop Burning | Pollution free environment is right of every citizen; issue being addressed for years but no effective action by State Govt.

Law abiding ex-employees cannot be put to disadvantage merely for vacating the quarters on notice; SC holds decision to grant quarters only to unauthorized occupants is illegal