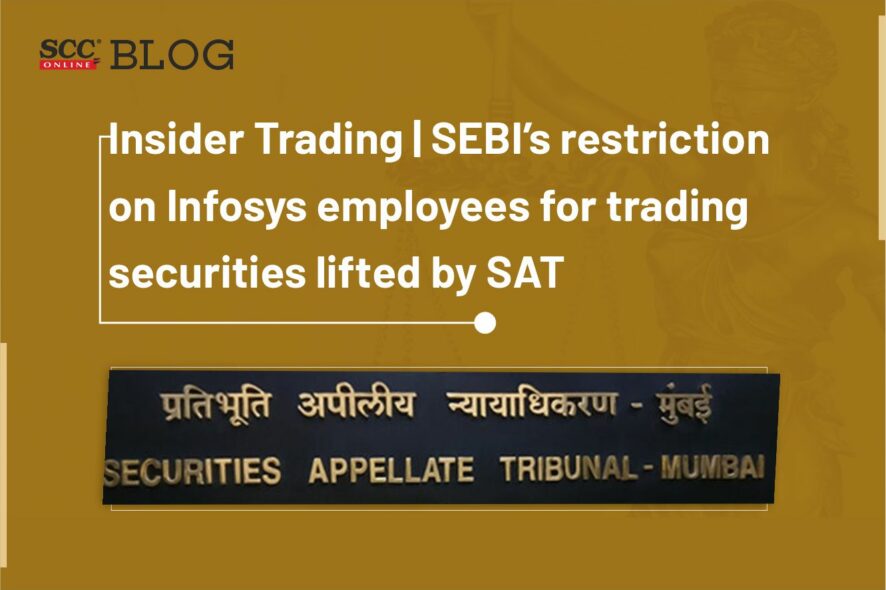 Securities Appellate Tribunal, Mumbai (SAT): While lifting the restriction of buying or selling any securities, laid down by SEBI on employees of Infosys for allegedly violating the insider trading regulations, the Coram of Justice Tarun Agarwala (Presiding Officer) and Justice M.T. Joshi (Judicial Member) reiterated the settled law that burden of proof is always upon the prosecution, SEBI to prove that he had access to UPSI.

Instant appeal had been filed questioning the confirmatory order confirming the ex-parte ad-interim order whereby the appellant was restrained from buying or selling any securities, either directly or indirectly, till further orders.

SEBI had conducted an examination in respect of the trading activities of two partnership firm – M/s Capital One Partners and M/s Tesora Capital in the scrip of M/s Infosys Ltd.

Further, it was found that the appellant was a Senior Corporate Counsel of Infosys and, being an officer/employee of Infosys, was reasonably expected to have access to the UPSI and, on a preponderance of probability basis, the appellant was in possession of UPSI and thus, was an insider under Regulation 2(1)(g) of the PIT Regulations.

On pre-liminary examination it was revealed that the appellant was in close connection with another employee Mr Venkata Subramaniam who was a Senior Principal and was designated person who was reasonably expected to and be in possession of UPSI and therefore, Mr Venkata was also an insider.

The appellant was closely connected to Mr Amit Bhutra, who was a partner in Capital One partner and Tesora Capital and passed on the UPSI to his cousin who in turn traded in the scrip of the Company prior to the announcement of the financial results. The examination further revealed that the two partnership firms through their trading had generated proceeds of Rs 279.51 lakhs in Capital Once Partners and Rs 26.82 lakhs in Tesora Capital.

Hence, an ex-parte ad-interim order was passed against the appellant.

The WTM prima facie concluded that the appellant was an insider and since he was working as a Senior Corporate Counsel, he was expected to have access to UPSI or expected to be in possession of UPSI, being a connected person.

In Coram’s opinion, the impugned order confirming the ex-parte ad-interim order could not be sustained for the following reasons:

Hence, in absence of evidence, the continuation of the interim order was unjustified especially when the appellant did not trade in the scrip and there was not any finding that he was a party to unlawful gain.

Therefore, debarring a person from accessing the securities market was not justified. The confirmatory order, as well as the interim order, cannot be sustained or quashed. [Pranshu Bhutra v. SEBI, Appeal No. 689 of 2021, decided on 25-4-2022]

Attachment of Bank Accounts of a Corporate Debtor: Is it violative of S. 14 of IBC during pendency of Corporate Insolvency Resolution Process? NCLT explains

Competent Authority under Petroleum and Minerals Pipelines (Acquisition of Right of User in Land) Act, 1962 should be a person who is holding or has held a Judicial Office