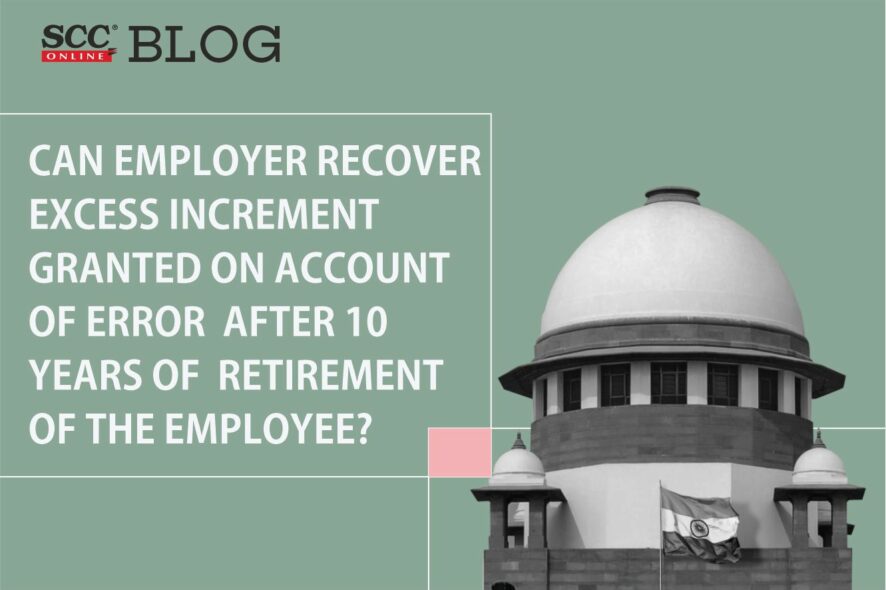 Supreme Court: Reversing the concurrent findings of the Single Judge and Division Bench of Kerala High Court, the Bench of S. Abdul Nazeer* and Vikram Nath, JJ., held that the State cannot recover excess amount paid to the ex-employee after the delay of 10 years.

The Court held that if the amount was not paid on account of any misrepresentation or fraud of the employee but it was the employer who applied wrong principle for calculating allowance or misinterpreted a, such excess payment of emoluments or allowances are not recoverable. The Court clarified,

The issue before the Court was whether increments granted to the appellant, while he was in service, can be recovered from him almost 10 years after his retirement on the ground that the said increments were granted on account of an error?

Later on, the appellant was promoted as Headmaster of the school and was granted senior grade promotion and his pay scale was revised accordingly. Consequently, a notice was served to the appellant by District Educational Officer with an objection that the period of leave obtained for undergoing higher education should not be included while determining total qualifying service. Therefore, the Educational Officer recommended that pay and subsequent increments granted to the appellant should be recovered from him.

The proposal to initiate recovery proceedings was challenged by the appellant before the Public Redressal Complaint Cell which rejected the said complaint stating that post-graduation degree M. Sc. (Chemistry) was not useful as per the Rule 91A Part I of the Kerala Service Rules in any manner to the public service, therefore, leave without allowance could not be counted for service benefits.

Impugned Findings of the High Court

Meanwhile, the appellant retired from service. Pursuant to the order of Educational Officer the Deputy Director Education sanctioned the release of 90% of the death-cum-retirement gratuity (D.C.R.G.) amount after withholding 10% of the said amount. Aggrieved, the appellant approached the High Court which upheld the reasoning given by the State and dismissed the writ petition holding that the mistake committed by the department while granting the service benefits can be rectified subsequently by way of proposed recovery to be effected from appellant’s D.C.R.G. amount.

The Court opined that if the excess amount was not paid on account of any misrepresentation or fraud of the employee or if such excess payment was made by the employer by applying a wrong principle for calculating the pay/allowance or on the basis of a particular interpretation of rule/order which is subsequently found to be erroneous, such excess payment of emoluments or allowances are not recoverable.

However, the Court clarified that if in a given case, it is proved that an employee had knowledge that the payment received was in excess of what was due or wrongly paid, or in cases where error is detected or corrected within a short time of wrong payment, the matter being in the realm of judicial discretion, the courts may on the facts and circumstances of any particular case order for recovery of amount paid in excess.

Hence, considering that the access amount was not paid on account of misrepresentation or fraud played by the appellant, the Court held that an attempt to recover the said increments after passage of ten years of retirement was unjustified. Consequently, the impugned judgment and order was set aside and quashed.

Wife leaves matrimonial home and never returns after several requests and legal notice under S. 9 of HMA, alleges husband of several cruelties without any evidence: Would it amount to desertion and cruelty by wife? Del HC answers

Jhar HC | S. 18(6) of JVAT Act, 2005 does not contemplate production of JVAT-404 Forms as a mandatory condition for availing benefit of ITC