Sikkim High Court: The Division Bench of Meenakshi Madan Rai and Bhaskar Rai Pradhan, JJ. partly allowed an appeal which was filed by the appellant who aged about 40 years, was accused of having committed the offence of aggravated penetrative sexual assault, as defined under Section 5(m) of the Protection of Children from Sexual Offences Act, 2012 (for short “POCSO Act”), on the victim, aged about 10 years. Trial Court on consideration of the evidence on record convicted the Appellant of the offence under Section 5(m) punishable under Section 6 of the POCSO Act, 2012 by the impugned Judgment and Order on Sentence, both dated 11- 11-2020, and sentenced him to undergo rigorous imprisonment for a term of 40 years and to pay fine of Rs.30,000/- (Rupees thirty thousand) only, with a default clause of imprisonment of 5 years.

In appeal the counsel for the appellant contended that FIR was lodged belatedly on 12-10-2019, the incident allegedly having taken place on 05-10-2019, but the delay was unexplained. It was further pointed out that the I.O. in his evidence has admitted that the vaginal swab of the victim and the penile swab of the Appellant were sent for chemical analysis to RFSL Saramsa, however, neither the document nor the examiner were before the Court. The I.O. admitted that no bodily fluids, blood or semen could be detected on the items forwarded to the FSL, which thereby negatives the Prosecution case, Doctor who examined the victim found no traces of penetrative sexual assault.

The question for consideration was whether the Trial Court was correct in its reasonings leading to the conviction of the Appellant?

The Court believed that Trial Court while examining a witness under the provision of the POCSO Act is required to be more careful and circumspect relying on Nipun Saxena v. Union of India, (2019) 2 SCC 703 and in the case at hand, it is unlikely that the child was aware of what she had stated to the Magistrate earlier or how “showing” her the Section 164 Cr.P.C. statement would enable her to understand or verify the contents, further it was stated that it was now no more res integra that a statement under Section 164 Cr.P.C. was not substantive evidence as held in R. Shaji v. State of Kerala, (2013) 14 SCC 266. The Section 164 Cr.P.C. statement of the victim was thus disregarded by the Court as being an unproven document.

The Court further believed Trial Court in its alacrity to come to the rescue of the child has decided on its own, without specific description of the act by the victim, to interpret the word “chara” as an act of penetrative sexual assault. This Court is all for the Trial Courts exhibiting sensitivity to the plight of a child victim but they cannot go overboard and stonewall the steps that are mandatorily to be complied with when analysing and interpreting the evidence given by the witnesses. If the victim was competent to testify she was also competent to explain the act and what it involved. If the act is not described, the Court cannot arrive at a conclusion based on its own assumptions.

Court on further perusal of evidence concluded that the Appellant was naked and had undressed the child as well, limiting the offence to one under Section 18 of the POCSO Act for an attempt to commit an offence under Section 7.

The Court in the light of evidence concluded that the Prosecution has failed to prove its case under Section 5(m) of the POCSO Act. The Court stated that they were aware of the fact that it is now settled law that there does not necessarily have to be physical indications of the offence of penetrative sexual assault but at the same time it is to be borne in mind that the victim is aged about 9 years while the Appellant is a grown man of 40 years. In such a situation, the act of penetrative sexual assault on a child will have physical repercussions and the indications of such an assault would be apparent on the genital/private parts of the victim. Thus, the Court opined that there was no penetrative sexual assault committed by the Appellant on the victim. The Prosecution case on this aspect has remained unproved. However, the offence of an attempt to commit “sexual assault” as defined under Section 18 of the POCSO Act cannot be ruled out. Finally, partly allowing the appeal and in the light of provision of Section 222(2) of the Cr.P.C., the Appellant was convicted under Section 18 of the POCSO Act read with Section 7 of the same Act. He was sentenced to undergo rigorous imprisonment for one year six months and to pay a fine Rs 10,000/- (Rupees ten thousand) only.[Ash Bahadur Subba v. State of Sikkim, 2022 SCC OnLine Sikk 42, decided on 05-05-2022] 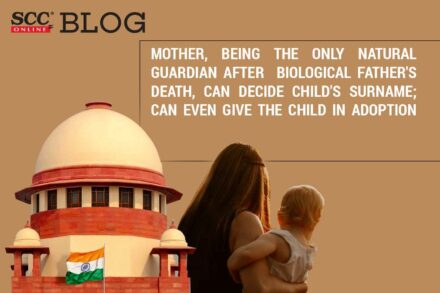 Mother, being the only natural guardian after biological father’s death, can decide child’s surname; can even give the child in adoption: SC