Gujarat High Court: Biren Vaishnav, J. allowed a petition which was filed challenging the order of termination passed by the respondent – authority, by which, the services as Assistant Motor Vehicle Inspector, Class-III of the petitioner has been terminated on the ground of lodging of an FIR under Sections 7, 8, 12, 13(1)(D) and 13(2) of the Prevention of Corruption Act.

Counsel for the petitioner submitted that even otherwise summary report has been filed in context of the FIR in question, the short ground on which the petitioner has assailed the order of termination that it was contrary to the law laid down in a decision rendered by the Division Bench of this Court dated 24-07-2020 rendered in Letters Patent Appeal No.1596 of 2019 in case of State of Gujarat v. Chetan Jayantilal Rajgor where the Court had explained the importance of full scale inquiry before any action could be taken by the authority against the accused.

The Court considered the decision relied on by the counsel of the petitioner and quashed the order of termination. The petition was allowed and the respondent-authority was directed to reinstate the petitioner without back-wages within ten weeks from the date of order. It was further clarified that respondent authorities will not be precluded from proceeding against the petitioner for the alleged misconduct.[Hiren Dahyabhai Rathod v. State of Gujarat, R/Special Civil Application No. 15471 of 2020, decided on 13-04-2022] 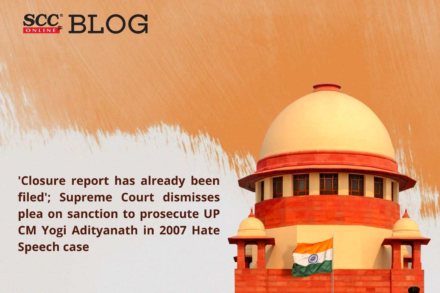 ‘Nothing survives after filing of Closure Report’; Supreme Court dismisses plea on sanction to prosecute UP CM Yogi Adityanath in 2007 Hate Speech case

Rivers have an inherent right to flow, companies involved in hydro-electric projects cannot be permitted to use rivers as ‘dumping sites’