Kerala High Court: Observing that trauma in a marital discord is common to both parties, the Division Bench of A. Muhamed Mustaque and Sophy Thomas, JJ., expressed that as per Section 25 of the Hindu Marriage Act, while awarding permanent alimony and maintenance, the husband’s income and other property, if any, and the income and property of the wife, conduct of the parties and other circumstances are to be taken into account.

Wife and children of the respondent had filed under Sections 10,24 and 25 of the Hindu Marriage Act and under Sections 18, 20(1)(d) and 26 of the Protection of Women from Domestic Violence Act, for judicial separation, permanent alimony, compensation and injunction.

The matrimonial life of the 1st respondent was miserable due to the cruel nature and behavourial problems of the appellant. She was treated like a slave and the appellant has no love or affection for her.

In view of the above, the wife shifted to her parent’s house along with her children and since 2011, both of them have been living separately.

Further, it was stated that the husband sought divorce from the 1st respondent after branding her as a mental patient. Though the wife sought a decree for judicial separation, permanent alimony, compensation for physical and mental torture since she didn’t want her children to be known as the children of a divorcee.

Though the appellant/respondent opposed the petition and denied the allegations.

Family Court found that 1st respondent/wife was entitled to a decree for judicial separation, monthly separation, maintenance of Rs 20,000, compensation of Rs 5 lakhs and injunction prohibition the appellant from alienating the schedule property. The minor children were also awarded monthly maintenance of Rs 15,000.

High Court observed that the Family Court exercising jurisdiction under the Hindu Marriage Act, at the time of passing any decree, can order a gross sum or such monthly periodical sum towards maintenance and support for a term not exceeding the life of the applicant.

Only the wife/husband is entitled for permanent alimony as per Section 25 of the Hindu Marriage Act, and the children will not get any amount under that head.

High Court stated that in order to pay monthly maintenance to the children at the rate of Rs 15,000 was to be set aside reserving their right to approach the Family Court with a separate petition for enhancement of maintenance if they propose to do so.

Noting the financial capacity and potential of the appellant as a highly professional and the properties and buildings owned by him, Court found it just and proper to award a lump sum amount of Rs 30 lakhs as permanent alimony instead of the monthly maintenance of Rs 20,000 ordered by the Family Court.

Lastly, the Bench held that, Section 25 of the Hindu Marriage Act specifically says that, the permanent alimony and maintenance ordered under that Section may be secured, if necessary, by a charge on the immovable property. So, the injunction order granted by the Family Court was against the spirit of Section 25 of the Hindu Marriage Act.[P.V.G. Menon v. Anjana Menon, 2022 SCC OnLine Ker 1479, decided on 24-3-2022] 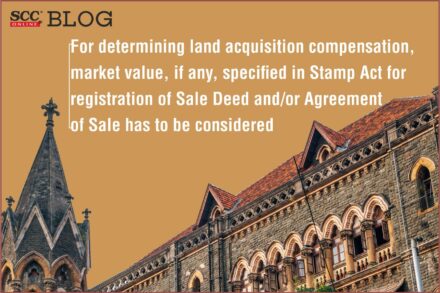 For determining land acquisition compensation, market value, if any, specified in Stamp Act for registration of Sale Deed and/or Agreement of Sale has to be considered: Bom HC

Mere recovery of bribe would not prove charges against the accused