In the present matter, the challenge was to an order issued by Competition Commission of India on 28-2-2022, wherein an investigation under Section 26(1) of the Competition Act 2002 was directed.

The Bench stated that the purpose of the present order was to simply hold the parties in a form of a status quo or a neutral position until they can be heard fully once the Court reopens after the summer recess and once the CCI has been given a reasonable opportunity to file an affidavit and submit a compilation of relevant law.

Additionally, the High Court intended to give 2nd respondent, the complainant, an opportunity before the CCI to file a further affidavit.

The 2nd respondent ADNPL a Multi-System Operator (MSO) had filed an application with CCI seeking an order under Section 26(1) of the Competition Act. It was stated that ADNPL provides digital TV services predominantly in Kerala but also in Karnataka, Andhra Pradesh, Telangana and Odisha. It has been in the business of distribution of TV channels for the better part of three decades.

Whereas the petitioners are stated to be satellite-based TV channels, and each has multiple channels in different languages and genres. ADNPL receives broadcasting signals from these broadcasters and both petitioners and ADNPL have had a commercial business relationship for nearly two decades.

As per the regulations and decisions of TRAI and TDSAT, broadcasters must not have discriminatory pricing in commercial contracts with multi-service operators. The 2017 Regulations cap discounts and distribution fees payable to distributors.

ADNPL submitted that due to various discriminatory acts, it had to seek legal redress.

In view of ADNPL, the petitioners were in the position of dominance and had provided a direct competitor of ADNPL in Kerala, one Kerala Communicators Cables Limited (KCCL) significant discounts though these were indirectly buried in the form of allied agreements that apparently offered a cashback system.

Whether the above is correct or not was still to be determined.

The primary complaint of ADNPL was that agreements were intended to bypass the TRAI/TDAST set caps or upper limits, or to subvert them and to that extent were shame or bogus agreements only ostensibly complying or being in accordance with what was permissible but actually designed to provide unfair advantage ADNPL’s competitor, KCCL.

Hence, CCI had directed the DG to cause an investigation and submit a report.

High Court opined that CCI must be afforded an opportunity of placing its case fully before the Court. Further, ADNPL too may wish to place a law or filed a further affidavit.

The Bench held that it would hold the matter over to the 8th June 2022 when it will be placed high on the supplementary board for directions so that it can fix a date for final disposal at the admission stage. CCI will file its Affidavit in Reply and compilation of documents by 7th May 2022. By that date, any further Affidavit in Reply by the complainant must also be filed. Court will permit a Rejoinder by 3rd June 2022.

High Court directed CCI to not pass any orders or adjudicate further on the 2nd respondent’s complaint until further orders of the Court. 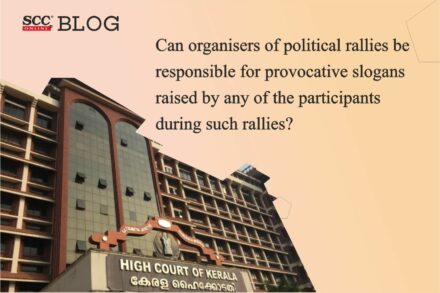 Can organisers of political rallies be responsible for provocative slogans raised by any of the participants during such rallies? Ker HC answers