Insolvency and Bankruptcy Code, 2016 (IBC) has been a hot topic since its inception. However, despite it being in force for almost 6 years now, and witnessing innumerable challenges and disputes, there are still some areas which lacks clarity. “Interest” qua debt is one such zone. There has been some discussion around this issue before courts, however, there are still certain nuances that are yet developing. In this blog, we attempt to consolidate the prevalent views on some of such issues. More precisely, the following:

Distinction in treatment of “interest” under “financial debt” versus “operational debt”

Prior to IBC, financial debt and operational debt were not considered differently for the purpose of initiating winding-up proceedings against a company for its inability to pay debt under the Companies Act.[1] However, with the introduction of IBC, the debts have been classified into two categories, namely, (i) financial debt; and (ii) operational debt. For both these debts, IBC provides for different procedures with corresponding rules and regulations.

Amongst many, one relevant distinction between the two debts is in relation to the component of “interest”. The term “financial debt” is defined to include “interest” (if any), while there is no mention of “interest” in the definition of “operational debt”. The definitions are reproduced below:

(8) “financial debt” means a debt along with interest, if any, which is disbursed against the consideration for the time value of money and includes […]

(21) “operational debt” means a claim in respect of the provision of goods or services including employment or a debt in respect of the [payment] of dues arising under any law for the time being in force and payable to the Central Government, any State Government or any local authority;

Although, the distinction in the treatment of “financial” and “operational” debt and creditor has been sufficiently deliberated and upheld by the Supreme Court in the celebrated case of Swiss Ribbons (P) Ltd. v. Union of India[2], the distinction viz. the component of “interest” is not explicitly dealt with yet.

Some guidance, however, in this regard may be drawn from the Supreme Court decision in Pioneer Urban Land and Infrastructure Ltd. v. Union of India[3] wherein while classifying home buyers as “financial creditors” and not as “operational creditors”, Supreme Court noted that:

In other terms, “interest” is not necessary for an “operational debt”, as there the consideration is the value of the goods or services sold or availed by the corporate debtor from the operational creditor. Limited relevance it may drawis when payment of the said consideration is delayed beyond a due date, and the “interest” is levied. Such interest, however, is in the form of “penalty” and not a return on investment. Thus, it could be argued that the distinction in definition do hold some rationale.

However, this distinction has expansive implications under IBC and has given light to newer issues such as whether “interest” is even chargeable upon an “operational debt”, and if yes, whether such interest is an “operational debt” capable of giving rise to an action under IBC Section 9, or whether can it be clubbed with the principal component of the debt to cross-over the threshold limit of INR 1 crore for filing an insolvency application. Lets see the position of law as it exists today on these issues.

Whether “interest” is chargeable on “operational debt”

There has been a difference in reasoning of different NCLTs in regard to this issue. Some have held it appropriate for “interest” to be charged as default, while others consider it more appropriate if there is a mutual agreement between parties to charge interest.

In the case of the former, for e.g. NCLT Mumbai in D.F. Deutsche Forfait AG  v. Uttam Galva Steel Ltd.,[5] observed that there is also some time value of money for an “operational debt” as goods or services are supplied against money as consideration. It observed that it is not expected that delay in payments of consideration beyond time is left uncharged. It is a known fact that the money today will worth less from what it was worth yesterday, and hence, any delay beyond the credit period should entitle the creditor to claim “interest”. NCLT noted that:

“[…] On commercial side, the [operational] creditor claiming interest is quite normal and justifying, after all, business always runs keeping in mind the time value of money […]”

Against this, NCLT Chandigarh[6] and Kolkata[7] have aligned more in line with the latter approach and held that it ismust that there is a mutual understanding between the parties for interest to be chargeable and that it cannot be a unilateral act of the creditor. For instance, in Wanbury Ltd. v. Panacea Biotech Ltd.,[8] NCLT Chandigarh held that in absence of an agreement stipulating “interest”, interest is not chargeable. It was observed that IBC does not empower the adjudicating authority to impose interest on the parties, much less determine the rate of such interest.

Subsequently, even NCLT Mumbai revisited this question in Vitson Steel Corp (P) Ltd. v. Capacite Infraprojects Ltd.,[9] and united with the latter approach by holding that interest cannot be claimed as an “industry practice” on an operational debt. It held:

“24. The object of the Code is not advanced by surprising the corporate debtor with a claim for interest firstly by claiming that it was as per industry practice and thereafter making a pitch that it was as per (MSME Act) Micro, Small and Medium Enterprises Development Act, 2006, when the operational creditor was confronted with a question posed by this Bench as to how the claim for interest was sustainable when neither the purchase order nor the invoices carried a provision therefor. […]

NCLAT too in Steel India v. Theme Developers (P) Ltd.,[10] upheld the latter approach and held that interest cannot be claimed if not agreed upon between the parties.

“[…] It is settled that the charging of interest, ought to be an actionable claim, enforceable under law, provided it was properly agreed upon between the parties.”

Thus, while there is still scope for a Supreme Court decision to settle the issue conclusively, the NCLAT decision does clarifies the position of law on this issue that “interest” is chargeable on an “operational debt” provided there is an agreement to that effect.

Whether “interest” would qualify as “operational debt” to file insolvency application under Section 9 of IBC.

While it is a good development that the interest on operational debt is being recognised and considered, there is also an unintended upshot of it as the creditors have started approaching NCLT seeking initiation of insolvency proceedings basis solely their claim towards interest even though the principal debt stands paid. This practice has, however, been deprecated regularly by both NCLT and NCLAT.

One of the earliest pronouncement on this issue was NCLAT decision in Krishna Enterprises v. Gammon India Ltd.[11] Here, the creditor filed a Section 9 Petition based merely upon “interest”. No principal amount was due. NCLAT Delhi although rightly dismissed the Section 9 petition but it was based on an incorrect reasoning that “interest” does not qualify as “debt” under IBC unless the interest is payable under the terms of the agreement. In other words, as per this decision, interest would qualify as “debt” if agreed between the parties.

Subsequently, however, NCLAT in S.S. Polymers v. Kanodia Technoplast Ltd.,[12] moved beyond the ruling in Gammon[13] and dismissed the Section 9 petition noting that it was being pursued only for realisation of interest amount in gross misuse of the IBC process as recovery mechanism. NCLAT held:

In a more recent decision, Amsons Communication (P) Ltd. v. ATS Estates (P) Ltd.[14], NCLAT Delhi reaffirmed this position and held that the provisions of IBC cannot be allowed as a recovery mechanism or to recover the claim of interest by operational creditor. It was held that Section 9 petition cannot be converted into proceedings for recovery of interest by operational creditor on delayed payment, as that is not the object of IBC.

Thus, it has been settled that “interest” in itself is not sufficient to maintain a Section 9 petition under IBC.

Post Notification dated 24-3-2020[15], the executive has revised the threshold for initiating insolvency proceedings under IBC to INR 1 crore from INR 1 lakh. Consequent thereto, courts[16] have held that if the insolvency application is filed after 24-3-2020, the increased threshold will apply. High Court of Kerala too, more recently, in Tharakan Web Innovations (P) Ltd. v. NCLT,[17] held that from the date of notification, IBC can apply only to matters relating to insolvency and liquidation of corporate debtors, where the minimum amount of default is INR 1 crore. Thus, no application can be filed after 24-3-2020 regarding an amount where the default is less than INR 1 crore.

This revision was intended to weed out applications filed for smaller defaults and to provide a breathing space to debtors during the COVID crisis. However, parties attempted to circumvent this by clubbing “interest” with “principal” debt to crossover the threshold limit.

Recently, in one such situation, NCLT Delhi in CBRE South Asia (P) Ltd. v. United Concepts and Solutions (P) Ltd.,[18] dismissed the Section 9 petition and held that interest amount cannot be clubbed with the principal amount to arrive at the minimum threshold of INR 1 crore. In this case, operational creditor had claimed a default of total amount of Rs. 1,39,84,400, out of which INR 88,50,886 was towards principal whereas the remaining INR 51,33,514 was towards interest. Since the principal outstanding was less than INR 1 crore, NCLT dismissed the petition as not maintainable. NCLT held:

“[…] it can be inferred that the ‘interest’ can be claimed as the financial debt, but neither there is any provision nor there is any scope to include the interest to constitute as the operational debt.”

While this reasoning is in line with the position of law as settled on related issues of “interest” viz. operational debt (as dealt above), it remains to be seen how different NCLTs and NCLATs look at this issue in the times to come. However, in order to prevent divergent views, it would be more apposite if these issues are settled through an authoritative judgment from NCLAT or Supreme Court and help avoid congestion before NCLT on account of filing of numerous otherwise non-maintainable Section  9 petitions.

[5] 2017 SCC OnLine NCLT 546. In this case, there were two bills of exchange and the debtor agreed to pay within 180 days. Since, the payments were not made, interest was sought to be levied by the creditor. This order was however later set-aside by NCLAT on different grounds.

[7] Gulf Oil Lubricants India Ltd. v. Eastern Coalfields Ltd., 2019 SCC OnLine NCLT 7749. In this case, invoices carried a stipulation of interest on overdue payment and the debtor countersigned the same. This order was, however, later set aside by NCLAT in view of settlement between parties. 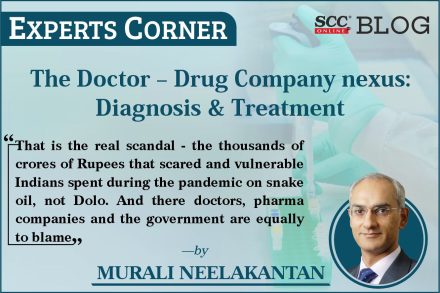