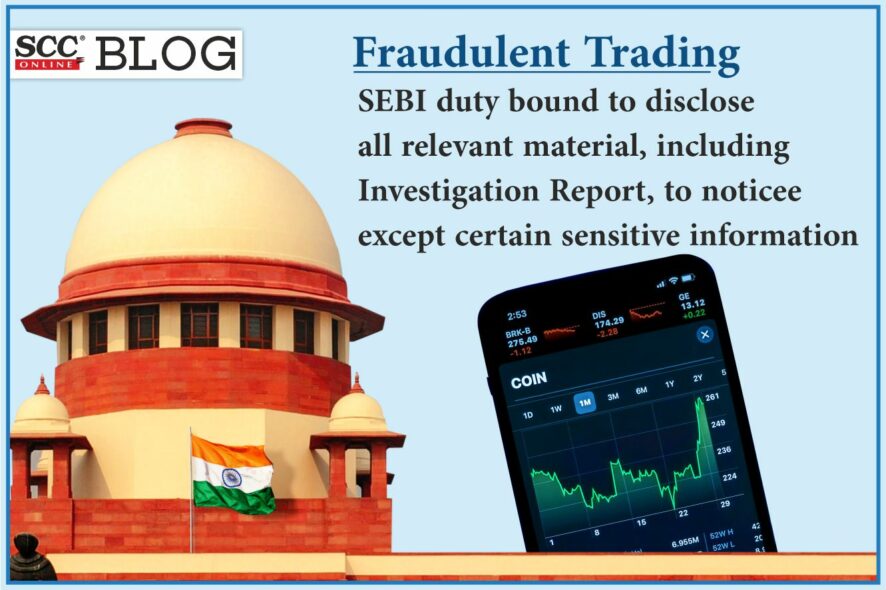 Supreme Court: In a case where the Court was dealing with the violation of the provisions of the SEBI (Prohibition of Fraudulent and Unfair Trade Practices) Regulations 2003 [PFUTP Regulations], the bench of Dr. DY Chandrachud* and Sanjiv Khanna, JJ has held that as a general rule, SEBI is duty bound to disclose all the relevant material, including the Investigation Report, in order to give reasonable opportunity to be heard to the notice. However, as an exception, it can redact information that impinges on the privacy of third parties.

After going through a number of judgments, the Court summarized the following principles:

In all reasonable probability, such material would have influenced the decision reached by the authority. Thus, the actual test is whether the material that is required to be disclosed is relevant for purpose of adjudication. If it is, then the principles of natural justice require its due disclosure.

The purpose of disclosure of information is not merely individualistic, that is to prevent errors in the verdict but is also towards fulfilling the larger institutional purpose of fair trial and transparency. Since the purpose of disclosure of information targets both the outcome (reliability) and the process (fair trial and transparency), it would be insufficient if only the material relied on is disclosed. Such a rule of disclosure, only holds nexus to the outcome and not the process. Therefore, as a default rule, all relevant material must be disclosed.

It would be fundamentally contrary to the principles of natural justice if the relevant part of the investigation report which pertains to the noticee is not disclosed. The noticee has to be given a reasonable opportunity of hearing. The requirement of a reasonable opportunity would postulate that such material which has been and has to be taken into account under Regulation 10 must be disclosed to the noticee. If the report of the investigation authority under Regulation 9 has to be considered by the Board before satisfaction is arrived at on a possible violation of the regulations, the principles of natural justice require due disclosure of the report.

“Merely because the investigating authority has denied placing reliance on the report would not mean that such material cannot be disclosed to the noticee. The court may look into the relevance of the material to the proposed action and its nexus to the stage of adjudication. Simply put, this entails evaluating whether the material in all reasonable probability would influence the decision of the authority.”

However, it was held that the right to disclosure is not absolute. It needs to be determined if the non-disclosure of the investigative report is protected by any of the exceptions to the rule.

Exceptions to the Duty to Disclose

The Court noticed that there could be a wide range of sensitive information that the investigation report submitted under Regulation 9 may cover, ranging from information on financial transactions and on other entities in the securities market, which might affect third-party rights. The report may contain market sensitive information which may impinge upon the interest of investors and the stability of the securities market. Hence,

“The requirement of compliance with the principles of natural justice cannot therefore be read to encompass the right to a roving disclosure on matters unconnected or as regards the dealings of third parties. The investigating authority may acquire information of sensitive nature bearing upon the orderly functioning of the securities market. The right of the noticee to disclosure must be balanced with a need to preserve any other thirdparty rights that may be affected.”

Therefore, SEBI should determine such parts of the investigation report under Regulation 9 which have a bearing on the action which is proposed to be taken against the person to whom the notice to show cause is issued and disclose the same. It can redact information that impinges on the privacy of third parties. It cannot exercise unfettered discretion in redacting information. On the other hand, such parts of the report which are necessary for the noticee to defend his case against the action proposed to be taken against him need to be disclosed. It is needless to say that the investigating authority is duty-bound to disclose such parts of the report to the noticee in good faith. If the investigating authority attempts to circumvent its duty by revealing minimal information, to the prejudice of the noticee, it will be in violation of the principles of natural justice. The court/appellate forum in an appropriate case will be empowered to call for the investigation report and determine if the duty to disclose has been effectively complied with.

Protests on Jantar Mantar stretch had caused an alarming situation

COVID-19| SC allows 3 Jain temples to open in Mumbai for ‘Paryushan’; says the order cannot be used as a precedent