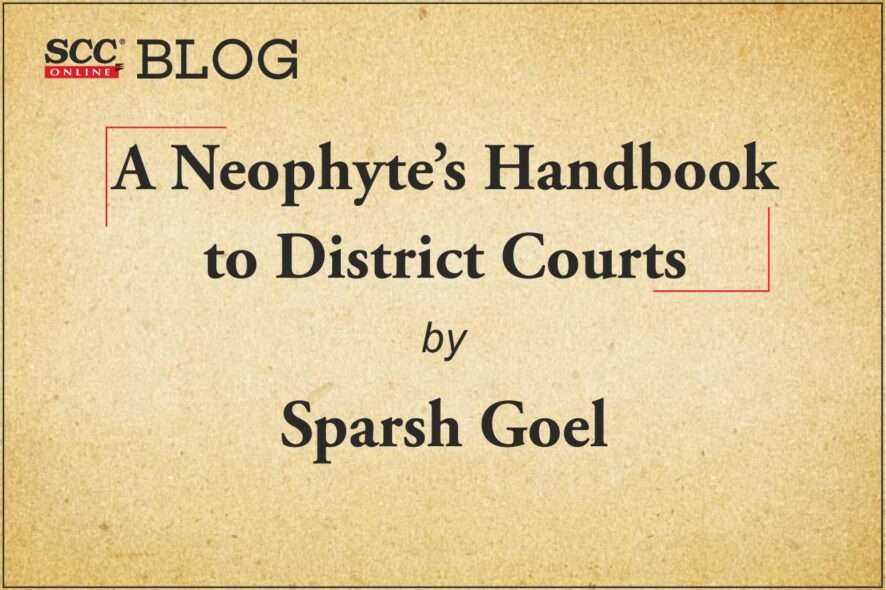 District Courts are the first place where a law student starts to explore the nitty-gritty of the legal system in India. Almost every single case or suit finds its genesis in the District Court. Whilst a District Court may be a goldmine for someone alien to the Indian judicial system, this short guide seeks to equip you with a pickaxe to understand it all. This guide will help you in understanding the structure and functioning of courts. Further the physical layout of a courtroom, composition of the court staff, general Urdu calques used and the general structure of the District Court judiciary. 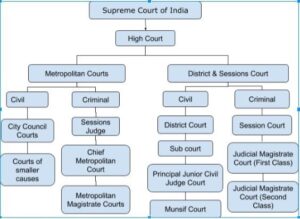 In addition to the above, Special Courts are courts set up for expeditious resolution of cases that involve special subject-matter. These courts are allocated all cases pertaining to the subject-matter, for which they are set up. For example, an Additional Sessions Court set up for Narcotic Drugs and Psychotropic Substances Act, 19853 (the NDPS Act), would be dealing in matters concerned only with the NDPS Act.4

Court room.—The Bench consists of the Judge in the center, on the right (of the Judge) the reader is situated, right below the Bench is the stenographer and the clerk who handles the drafting of judicial documents. The orderly announces each case as per the cause list (a list of cases to be taken up that day). The orderly sits usually on the side of the reader.

The “reader” ensures the judicial documents are correct, for example, ensuring signatures of witnesses, etc., prepares other judicial documents to aid the Judge, polices everyone’s conduct, guides other staff of the courtroom. The reader is the seniormost court staff member. For any clarifications regarding dates, proceedings, cause list, decrees, etc. he or she may be approached.

The second most senior member, the stenographer (steno) is the “typing hand” of the Judge. Every order/judgment/charge/notice that bears the header of the court, emerges out of the steno’s computer. The Clerk aids the steno in drafting or maintaining documents and ensuring every box is ticked or every document attested, etc.

Court Naib is a police constable, serving as an attaché in the Department of Prosecution who maintains the peshi register (witness register), warrant/FIR register, etc. in the courtroom. In order to know which item number is ongoing or if a witness will come to the court today, he or she can be approached.

Public Prosecutor (PP).—Each criminal court has a separate table located on the right side, when you enter the court, where you will find the State’s legal representative. The PP assists the court in progression of the case and partakes to represent the interests of the State.5

Alhmad room.—This is a separate room with each court, which stores all records of that court. A Alhmad room is under the management of an Ahlmad assisted by two or more assistant Alhmads. An advocate inspects the case file here, after seeking permission of the court.

Dasti.—When it is remarked “Dasti to be given” it means an uncertified copy of the order, given to the party that requests for the same.

Courtroom decorum.—Discarding the cinematic exaggerations, every lawyer that appears before a court and wishes to be granted the prayed relief, places his or her arguments in a patient, calm and cogent manner. However, friendly banter is as common as a friendly Judge.

An application for exemption to appear, is excusal of an accused/co-accused for non-appearance in the court, due to reason stated, usually due to sickness or infirmity.6

A passover is a request for the matter (as a case is called) to be taken up later, at the requested time, or at the end of the cause list.

Oath Commissioner/notary.—A notary is a qualified and experienced lawyer, who is entrusted by the court to authenticate and verify identities, declarations, documents, etc.

Lastly, each District Court premises has: 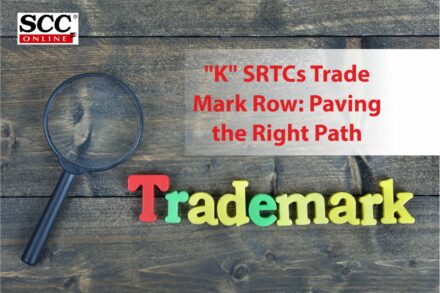 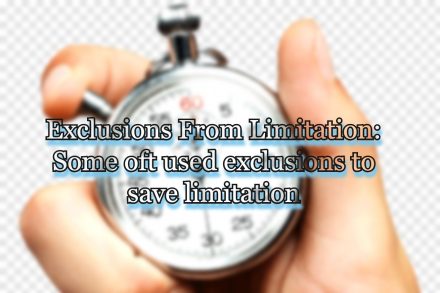 Exclusions From Limitation: Some oft used exclusions to save limitation