The instant appeal was filed by IDBI Bank in its capacity as a financial creditor and lead lender of EPC Construction India-Corporate debtor as well as a representative of all other lenders of the Corporate Debtor against the order of the NCLT whereby the application urging to direct the Respondent-Liquidator to permit the Financial Creditors of the Corporate Debtor to distribute an amount of INR 223 crore from the cash balance available with the Corporate Debtor in the proportion of their respective voting share in the erstwhile CoC had been dismissed.

The appellant submitted that the said application had been wrongly rejected by the Adjudicating Authority (NCLT) on the ground distribution of the cash would derogate the value of the Company, which observations were not in accordance with law.

Initially, an application was filed by the appellant-creditor before the Adjudicating Authority seeking a direction against the Respondent-Liquidator to distribute the available cash balance of the Corporate Debtor, amongst the stakeholders of the Corporate Debtor in favour of whom the same were charged, including the appellants herein, as per the waterfall mechanism set out in Section 53 of the Insolvency and Bankruptcy Code, 2016, and amongst the workmen of the Corporate Debtor as required under Section 53 (1) (b) (i) of the Code after accounting for the costs/reserving the estimated costs under Section 53(1) (a) towards Insolvency Resolution Process costs and the liquidation costs.

Noticeably, the liquidator did not raise any objection to distribution of surplus cash balance of the Corporate Debtor up to an extent of INR 220 Crores amongst the stakeholders in accordance with the order of priority and in the manner specified under Section 53 of the IBC, however, a condition was made to the extent that if there is any shortfall in meeting the requirements involved in the liquidation process, then the said amount shall be replenished by the financial creditors within a period of fifteen (15) days, from the date of demand. The said condition had been agreed by the appellants. The rationale behind the liquidator’s claim was following:

The liquidator contended that even after distribution of INR 223 crores, as sought in the appeal, the Corporate Debtor would have sufficient liquidity of approximately INR 80 (eighty) crores to enable him to run the liquidation process smoothly in accordance with law.

In the light of above submissions, the NCLAT reversed the decision of the Adjudicating Authority and directed for distribution of INR 223 crores as submitted by the Liquidator subject to undertaking by the members of the CoC to return the amount in the event they are paid any amount in excess to their entitlement as per waterfall mechanism under Section 53 of the Code. The impugned order was set aside.[IDBI Bank Ltd. v. Liquidator, EPC Constructions (India) Ltd., 2022 SCC OnLine NCLAT 43, decided on 27-01-2022]

Law on Rejection of Plaint | Contents of plaint or Examining sufficiency of plaint? Del HC explains the bounden duty of Court 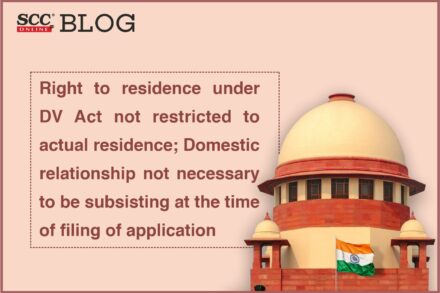 Right to residence under DV Act not restricted to actual residence; Domestic relationship not necessary to be subsisting at the time of filing of application: SC