The facts of the case are such that the petitioner is a rape victim assailing the order dated 09-07-2021 passed by the Ld. S.D.J.M. under Section 3 of the Medical Termination of Pregnancy Act, 1971 (hereinafter referred to as “the
MTP Act” for brevity). Being aggrieved by the order, the present petition under Section 482 of the Code of Criminal Procedure, 1973 has been filed in the instant court.

Counsel for petitioner submitted that the petitioner has been pregnant for more than 4 months and feels morally insecure to step out of her house due to horrendous social stigma attached to such crime. The social relations between men and women in which violence against women is often taken for granted, especially in cases like these the judge do decide their fate in the decision to abort or not to abort the pregnancy.

The Court observed that in the cases of this genre, the medical practice of abortion,  legal and illegal, has expanded but the Psycho-physiological and  social condition of the rape survivors form the essential aspects of  medical judgment especially in therapeutic abortion case.

In the absence of any report by medical team ascertaining the actual  period of pregnancy, the Court directed the office of the Advocate General in  order to facilitate the petitioner for testing of the period of  pregnancy accurately by a team of doctors as prescribed under the  Act. Accordingly, the test was conducted and report submitted which suggests it may be unsafe for getting the termination done at this stage. In fact, allowing the termination at  this stage could endanger the mother’s life or even lead to  substantial and irreversible impairment of a major bodily function.

The Court relied on judgment Suchitra Srivastava v. Chandigarh Administration (2009) 9 SCC 1 wherein it was observed that perusal of the provisions of the MTP Act makes it clear  that ordinarily a pregnancy can be terminated only when a medical  practitioner is satisfied that a ‘continuance of the pregnancy would  involve a risk to the life of the pregnant woman or of grave injury  to her physical or mental health’ [as per Section 3(2)(i)] or when  ‘there is a substantial risk that if the child were born, it would suffer  from such physical or mental abnormalities as to be seriously handicapped’ [as per Section 3(2) (ii)]. While the satisfaction of one medical practitioner is required for terminating a pregnancy within twelve weeks of the gestation period, two medical practitioners must be satisfied about either of these grounds in order to terminate a pregnancy between twelve to twenty weeks of the gestation period.

The explanations to this provision have also contemplated  the termination of pregnancy when the same is the result of a rape  or a failure of birth-control methods since both of these  eventualities have been equated with a ‘grave injury to the mental  health’ of a woman. In all such circumstances, the consent of the pregnant woman is an essential requirement for proceeding with the termination of pregnancy. This position has been unambiguously stated in Section 3(4)(b) of the MTP Act, 1971.  The exceptions to this rule of consent have been laid down in Section 3(4)(a) of the Act. Section 3(4)(a) lays down that when the  pregnant woman is below eighteen years of age or is a ‘mentally ill’  person, the pregnancy can be terminated if the guardian of the  pregnant woman gives consent for the same. The only other exception is found in Section 5(1) of the MTP Act which permits a registered medical practitioner to proceed with a termination of pregnancy when he/she is of an opinion formed in good faith that the same is ‘immediately necessary to save the life of the pregnant woman.

The Court observed that in the present case, there is no opinion of any registered medical practitioner regarding risk to life due to continuance of pregnancy of the petitioner or her physical and mental health. Further in the present case, the pregnancy exceeds 24 weeks and as per the requirement of the statute, the medical opinion of not less than two medical
practitioners was not obtained and no  medical opinion regarding termination of pregnancy, if, immediately  necessary to save the life of the petitioner as per Section 5 of MTP  Act. Therefore MTP Act does not permit the termination of pregnancy of the petitioner.

The Court further stated that the victim is being forced to bear and care for the unwanted child is bound to severely impact her personality and womanhood. Thus the court observed that her request should have been acceded to over and above the right to life of the child yet to be born. Though this issue has, time and again, knocks at the judicial threshold it is still crying for an unperplexed solution by way of suitable amendment in the statute governing the field.

The Court feels that the Police officers could have acted more sensibly and, at the very least, guided them to approach District Legal Service Authority or Legal Services Units at Taluk Level or to any para legal volunteers. This would have, perhaps, helped the victim to get timely legal advice and may have saved her from suffering the forced delivery, imposed on her due to medico- legal compulsions.

1).The District Collector, Cuttack shall ensure that arrangements are made to provide proper diet, medical supervision and medicines as may be necessary, to the  victim throughout the remaining part of her journey of  pregnancy. When the time for delivery arrives, proper medical facilities be made available for a safe delivery of  the child.

2).The State Legal Services Authority shall ensure that the State Government shall pay an amount of Rs.10, 00,000/- (rupees ten lakhs only) as compensation to the victim. This amount shall be over and above the compensation amount, if any, the learned Trial Court may direct to be paid to the victim and/or her child at conclusion of the trial in the underlying proceedings.

The Court held that it does feel that her welfare is of, paramount consideration for this court. “However, as regards the legal position, the above discussion and the mandate of Section 3 of the MTP Act, in particular, lead only to one conclusion i.e., since the length of the pregnancy of the victim is over twenty-six weeks, this Court cannot permit its termination.”

Serving liquor is banned in the State of Kerala, except for five star hotels 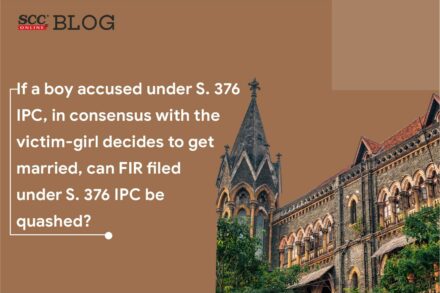