Orissa High Court:  A Division Bench of S.K. Mishra and Savitri Ratho, JJ., dismissed the petition being devoid of merits.

The instant petition was filed by Hi-Tech Edifice Pvt. Ltd., Khurda- in all and prayed to declare the proviso to Sub-Section (5) of Section 43 of the Real Estate (Regulation and Development) Act, 2016 (“the Act, 2016”) to be ultra vires of the Constitution of India.

The Petitioner asserts that Proviso to Sub-Section (5) of Section 43 of the Act, 2016 is vague and arbitrary inasmuch as it provides for three different, disproportionate and illusory modes of calculation of the amount to be deposited in the Appellate Tribunal by the promoter, as a precondition for the appeal to be entertained by the Tribunal. It is further submitted that the provision leaves an unbridled power in the hands of the Authority in that regard.

The Court relied on judgment Tecnimont Pvt. Ltd. v. State of Punjab, 2019 SCC OnLine SC 1228  and observed that a condition of pre deposit imposed by legislature in their wisdom cannot be considered to be unconstitutional not being unreasonable or onerous. It was also observed that Section 43 of the Act provides for three modes of calculation of the amount to be deposited in the Appellate Tribunal by the promoter as a precondition for the appeal to be entertained by the Appellate Tribunal. The intention of the legislature behind providing three different modes for calculating the amount to be deposited in the Appellate Tribunal before entertaining appeal depends on facts of each case. The facts may vary from case to case and hence it is not necessary or advisable to provide a strait jacket formula for every case. Hence, a pre deposit conditional order is quite reasonable. A concessional provision must be construed not in a narrow and constricted sense but in a wide and liberal manner.

“19. Constitution is not an ephermal legal document embodying a set of legal rules for the passing hour. It sets out principles for an expanding future and is intended to endure for ages to come and consequently to be adapted to the various crisis of human affairs. Therefore, a purposive rather than a strict literal approach to the interpretation should be adopted. A Constitutional provision must be construed not in a narrow and constricted sense but in a wide and liberal manner so as to anticipate and take account of changing conditions and purposes so that constitutional provision does not get fossilized but remains flexible enough to meet the newly emerging problems and challenges.”.

The Court further observed that while granting the right of appeal the legislature can impose condition for the exercise of such right. As long as the conditions are not so onerous, that it amounts to unreasonable restrictions rendering the right almost illusory.

A provision cannot be held to be unconstitutional being unreasonable and arbitrary. The admitted amount received from the allottee should be kept in deposit as condition precedent because the further right of the allottee to get compensation and penalty will be considered at the time of final hearing of the appeal. As such the right of the allottee will be protected and the proceeding will be finalized at an early date.

The Court observed the provision of sub-section (3) provides for deposit of amount which is already calculated by the Authority in a quasi judicial proceeding after taking into consideration all the materials available on record, a condition imposing a pre deposit by the promoter is not unreasonable or onerous. 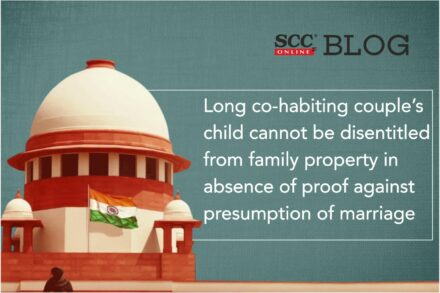 Long co-habiting couple’s child cannot be disentitled from family property in absence of proof against presumption of marriage: Supreme Court

SL CoA | Delay is a fatal error that would cause an application to be dismissed in limine; Revisionary power cannot be invoked due to callous disregard