“Principles laid down for Courts to deal with injunction applications, in a pending suit, seeking relief against passing off”

The facts of the case are such that the plaintiffs i.e. ITC Limited launched itself into the manufacturing and sales of ‘instant noodles’ in September 2010, under the brand name, ‘Sunfeast YiPPee!’ having different variant of noodles, including ‘Magic Masala’, ‘Mood Masala’, ’Classic Masala’, to name a few. The Plaintiff claimed protection from alleged misrepresentation and copyright infringement in respect of the ‘overall visual appearance’ (wrapper) of ‘Magic Masala’ variant of Sunfeast Yippee noodles by the defendants i.e. CG (India) Private Limited who manufactures and sells in the instant noodles market under the brand name ‘WAI WAI’ and the product under challenge is one of its white-noodles product, ‘WAI WAI Xpress Noodles Majedar Masala”. Plaintiff claims that the action of the defendant has caused damage to its goodwill and reputation in the market and as such defendant has to be restrained from using same and thus the plaintiff has sued defendant and it bases its cause of action in passing off and copyright infringement.

Counsel for the appellant- plaintiff Mr. K.G Raghavan submitted that that extent of similarity is sufficient to ‘deceive’ that class of persons who are likely to buy plaintiff’s goods. It was further submitted that the court below has fallen into error on a matter of principle in so far as it has laid emphasis on the ‘dissimilarities’ between the competing wrappers, instead of estimating the effect of the similarities.

Counsel for the respondent- defendant Mr. Dhyan Chinappa submitted that on an overall consideration of the competing wrappers, after ignoring the descriptive marks and marks common to trade, it is the ‘brand names’ that is really distinctive of the plaintiff and since the brand names are completely dissimilar; there is no likelihood of confusion. If the plaintiff’s case is that the colour scheme has been copied to the extent that it may lead to confusion, the plaintiff will have to show that the ‘orange-red’ colour scheme has acquired such a high level of distinctiveness in the market, that the ordinary purchaser would ignore all other features and rely solely on the colour scheme to identify the products of the plaintiff.

Concept of “passing off”

One of the cause of action upon which the plaintiff relied was passing-off and to establish an arguable case in passing-off action, the plaintiff must show a misrepresentation express or implied that the defendants wrapper is connected with or may be associated with the plaintiffs’ business and that as a consequence damage is likely to result to the plaintiffs.  In passing-off, following points are under consideration:

The entire basis of an action for the tort of passing-off lies in the making of a misrepresentation by the defendant which is calculated to cause damage to the business or goodwill of the claimant. The design that a typical form of misrepresentation generally takes is for the defendant to adopt that feature of the plaintiff’s mark which the ordinary purchaser is most likely to associate or use to identify the goods as that of a plaintiff.

Professor Wadlow claims that term ‘distinctive’ has a meaning of its own, in the legal sense, which does not coincide with the ordinary use of the term in common parlance. In its legal sense, a name, mark or get-up can be said to be distinctive ‘if it denotes the goods of the claimant to the exclusion of all others’. What plaintiff claims to be distinctive may be ‘distinctive in fact’ but the plaintiff cannot have the final say on what is distinctive in law. The concept of ‘distinctiveness’, can be concluded as the features relevant for our analysis, does not include all features (that is, overall get up) as claimed by the plaintiff, but it is those distinguishing features which perform the function of a trade mark – the function of a trade mark being that of ‘source identification’.

The Court observed that even a bare look at the wrapper of the Magic Masala brand would indicate that ‘Yippee’ written in yellow color and relatively, the largest font (in both 12 Rs packs and 48 Rs pack) stands out in contrast to the ‘Sunfeast’ logo which is written in red font against a red background; and with respect to Magic Masala, which is written in dark blue color in a much smaller font size against an orange background. ‘Yellow’ being a light as well as bright colour , coupled with the fact that Yippee bears a stylised script and large font, appears to strike itself to the sensory organs quite easily purely on first impression as well.

The Court further observed that the features which can be said to be ‘distinctive’ in law in the sense that the relevant public would rely on such features to associate the goods as that of the plaintiff or to identify the goods as that of plaintiff or to distinguish the goods of the plaintiff from others would be, essentially, the brand ‘Sunfeast Yippee’ and to a lesser extent, the sub-brand which indicates the various flavours – in this case, ‘Magic Masala’.

The Court thus observed that the misrepresentation must be believed by those to whom it is communicated [through word marks, visual marks, labels or the entire get up as a whole], and such persons must be likely to act in reliance of the supposed misrepresentation. As noted, persons are likely to act in reliance of those features of a plaintiffs product which is said to be ‘distinctive’ of it in the legal sense. Hence the question of distinctiveness and that of misrepresentation are not independent of each other but are strongly interdependent and are always capable of interacting with each other.

The test to determine ‘deceptive resemblance’ is essentially decided by asking two questions:

It was observed that in general it would not be an easy task for a plaintiff to establish a case of passing off by “get up” alone, especially at the interlocutory stage, unless the resemblance between the goods is so close that it can hardly have occurred except by deliberate imitation.

The Court observed that on careful analysis of the marks, logos, pictures and how the products are listed on digital platforms and physical stores it is clear that from the perception of the hypothetical purchaser, even after making allowance for imperfect recollection, the point of reference for purchasing the plaintiff’s goods is primarily the brand – Sunfeast Yippee, or the mark – Yippee or the phrase ‘Yippee Magic Masala’. “We find it rather unconceivable, at this stage (without any data or evidence in front of us) to conclude that the hypothetical purchaser would go and ask for ‘red-orange noodles’. Even if he does, it is very unlikely that a shopkeeper would straightaway handout the ‘Yippee Magic Masala’ brand of noodles since it has been show to us that there are other wrappers which may though not have, strictly speaking, an identical colour scheme but have similar colours on their wrappers.”

The Court further laid down principles for Courts to deal with injunction applications, in a pending suit, seeking relief against passing off. [Refer judgment]

The Court thus held “that order of learned trial Judge dismissing the applications filed by the plaintiff for grant of temporary injunction deserves to be affirmed.”

‘Citizens have the right to know and participate in deliberation and decision making’; Justice Khanna dissents in 2:1 verdict clearing the Central Vista Project 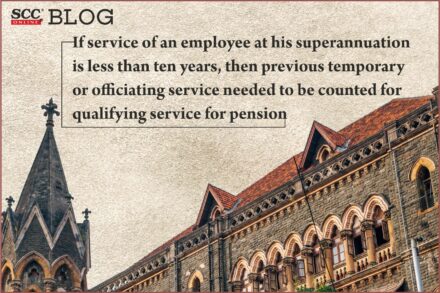 If service of an employee at his superannuation is less than ten years, then previous temporary or officiating service needed to be counted for qualifying service for pension: Bom HC