Supreme Court: In a case where a man, after being acquitted in a kidnapping case, had applied for the post of Constable in Central Industrial Security Force, the bench of Indira Banerjee and JK Maheshwari, JJ has held that the employer cannot be compelled to give appointment to such a candidate when the acquittal has been made on the basis of benefit of doubt.

“If a person is acquitted giving him the benefit of doubt, from the charge of an offence involving moral turpitude or because the witnesses turned hostile, it would not automatically entitle him for the employment, that too in disciplined force. The employer is having a right to consider his candidature in terms of the circulars issued by the Screening Committee. The mere disclosure of the offences alleged and the result of the trial is not sufficient. In the said situation, the employer cannot be compelled to give appointment to the candidate.”

if the acquittal is directed by the court on consideration of facts and material evidence on record with the finding of false implication or the finding that the guilt had not been proved, accepting the explanation of accused as just, it be treated as honourable acquittal.

“… if prosecution could not prove the guilt for other reasons and not ‘honourably’ acquitted by the Court, it be treated other than ‘honourable’, and  proceedings may follow.”

Th Court explained that the standard of proof required for holding a person guilty by a criminal court and enquiry conducted by way of disciplinary proceeding is entirely different. In a criminal case, the onus of establishing guilt of the accused is on the prosecution, until proved beyond reasonable doubt.   In case, the prosecution failed to take steps to examine crucial witnesses or the witnesses turned hostile, such acquittal would fall within the purview of giving benefit of doubt and the accused cannot be treated as honourably acquitted by the criminal court. While, in a case of departmental proceedings, the guilt may be proved on the basis of preponderance and probabilities, Hence, acquittal giving benefit of doubt would not automatically lead to reinstatement of candidate unless the rules provide so.

Applying these principles to the case at hand, the Court held that the respondent who wishes to join the police force must be a person of utmost rectitude and have impeccable character and integrity. A person having a criminal antecedents would not be fit in this category.

“The employer is having right to consider the nature of acquittal or decide until he is completely exonerated because even a possibility of his taking to the life of crimes poses a threat to the discipline of the police force.”

CIC | Can CPIO rely on other Rules, Acts, Order or Circulars in matters of RTI Act? Commission explicates 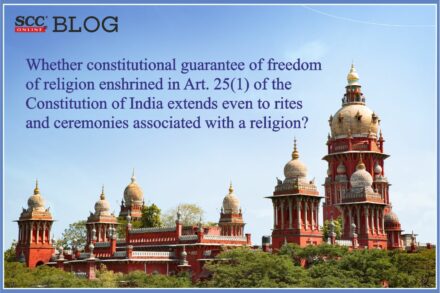 Whether constitutional guarantee of freedom of religion enshrined in Art. 25(1) of the Constitution of India extends even to rites and ceremonies associated with a religion? Read what Madras HC says on Right to Worship

Arithmetical approach in allowing recall of witness can be dangerous