Supreme Court: The Division Bench of K.M Joseph* and S. Ravindra Bhat, JJ., held that an unregistered family settlement document is admissible to be placed “in” evidence if it does not by itself affect the transaction though the same cannot be allowed “as” evidence. The Bench expressed,

The Court was dealing with the impugned order of the Telangana High Court, whereby the High Court had set aside the order passed by the Trial Court by holding that the unregistered and unstamped family settlement “Khararunama” and receipt of Rs. 2,00,000 by the respondent were not admissible in evidence.

It was contended by the respondent that the Khararunama required registration under section 17(1)(b) of the Registration Act, 1908 and under the said settlement, appellants ought to pay certain sum to the respondent. The document would come into force after the receipt of the consideration.

Undoubtedly, Section 17(1)(b) makes ‘other non-testamentary instruments’, which purport or operate to create, assign, limit or extinguish whether in present or in future any right or interest whether vested or contingent of the value of Rs.100/- and upwards in an immovable property compulsorily registrable. Section 17(1)(c) reads as follows:

“17(1)(c) non-testamentary instruments which acknowledge the receipt or payment of any consideration on account of the creation, declaration, assignment, limitation or extinction of any such right, title or interest; and”

Section 49(c) of Registration Act prohibits the admitting of compulsorily registrable documents which are unregistered as evidence of any transaction affecting immovable property unless it has been registered.

“To sum up it is well settled in a long series of decisions which have since received statutory recognition by the Amending Act of 1929 (vide the concluding words of the new proviso to Section 49 of the Registration Act) that a compulsorily registrable but an unregistered document is admissible in evidence for a collateral purpose that is to say, for any purpose other than that of creating, declaring, assigning, limiting or extinguishing a right to immovable property”.

Whether the Khararunama by itself affected rights in the immovable properties in question?

The next question before the Bench was whether the Khararunama by itself ‘affects’, i.e., by itself creates, declares, limits or extinguishes rights in the immovable properties in question or whether it merely refers to what the appellants alleged were past transactions which had been entered into by the parties, the Bench answered, going by the words used in the document, they indicate that the words were intended to refer to the arrangements allegedly which the parties made in the past and the document did not purport to by itself create, declare, assign, extinguish or limit right in properties.

As per Section 49(1) (a), a compulsorily registrable document, which is not registered, cannot produce any effect on the rights in immovable property by way of creation, declaration, assignment, limiting or extinguishment. Thus, observing that Section 49(1) prevents an unregistered document being used ‘as’ evidence of the transaction, which affects immovable property, the Bench stated,

In Muruga Mudallar v. Subba Reddiar, 1950 SCC OnLine Mad 136, the Madras High Court had held that, “the consequence of non-registration is to prohibit the document from being received not “in” evidence, but “as” evidence of any transaction affecting such property.”

As far as stamp duty was concerned, the Bench was of the view that since the Khararunama was a mere record of past transaction it did not require to be stamped.

Lastly, the Bench held, when there had been a partition, there may be no scope for invoking the concept of antecedent right as such, therefore since the appellants and the respondents had partitioned their joint family properties, the properties mentioned in the Khararunama would be separate properties of the respondent.

Resultantly, the Appeal was allowed. The impugned Judgment was set aside and the Khararunama was held to be admissible in evidence but not as evidence.

For the Respondent: Advocate Venkateshwar Rao 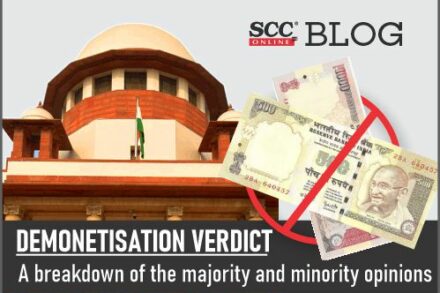 Demonetisation Verdict: Breakdown of the majority and minority opinions

Tenanted premises where a woman lives with her husband comes within the category of shared household, but as long as the tenancy survives