Present Consumer complaint under Section 2(1)(d)(i) read with Section 12(1)(c) of the Consumer Protection Act had been filed against Amazon Seller Service Private Limited seeking refund of the amount of Rs 9,119 paid towards purchase of Mobile Phone along with litigation and transportation cost of Rs 1 lakh and Punitive Damages to the tune of Rs 7,43,00,00,000 for causing legal injury and financial loss to the complainant and other innumerable consumers.

Complainant purchased a mobile phone from OP. It was contended that after using the Mobile Phone for a couple of days, it started heating up which compelled him to return the same as per the Easy Return Policy of the OP advertised on T.V. Serial, Media and Print Media.

Since, the Complainant was not able to click the option of Return/Exchange on their website, he called the Customer Support of the Opposite Party and was informed that they had changed its Return Policy on the items purchased.

Complainant sent an email to the OP stating that they had always advertised about Easy Returns and that at the time of purchase, it had not been mentioned that the Refund/Return Policy of the Opposite Party has been changed which amounted to Unfair Trade Practice on their part. Vide an email the OP apprised to the Complainant that if he had received a defective/damaged Phone, he would be eligible only for free replacement and not for a refund.

Further, in the invoice bill of the phone along with the order list, the option of returning the phone was given.

Hence, he stated that the action/inaction of the OP was in violation of the Right of Consumers to be informed about the product and to decide as to whether to purchase the same or not.

Complainant alleged that the OP was involved in Unfair Trade Practice by making a false promise and running misleading advertisement about Easy Refund of the Product. The OP was bound to disclose all the necessary information about its Product enabling the Consumers to take a decision as to whether buy the said product or not.

Commission while referring to the decision of Supreme Court in Magma Fincorp Ltd. v. Rajesh Kumar Tiwari, (2020) 10 SCC 399, answered the question as to whether the punitive damages claimed by the complainant can be treated as part of the compensation for determining the pecuniary jurisdiction of the commission.

In the said decision it was held that the Punitive damages cannot be treated as a form of compensation.

Punitive damages under Section 14(1)(d) of the Act cannot be granted by the Consumer Fora in cases of breach of contract unless the act is so reprehensible that it calls for punishment of the party in breach, by imposition of punitive or exemplary damages.

In the instant matter, Bench stated that some of the purchasers are purchasing the products on the online website and after using the said product for a few days, seek a refund of the amount paid by them.

The above was the reason why OP changed its policy of Easy Return.

Commission added that, in case the Complainant had received the defective mobile phone, the remedy was still available with him to get it replaced despite the change in Return/Refund Policy”.

OP had published in the newspaper, namely the Indian Express about the change in its Return Policy with the Heading “Amazon no longer has a return and get refund policy for mobiles” along with this, the said information was also published in NDTV Gadget 360 with the heading that “Mobile Purchased from Amazon India No longer Eligible for Return”

In so far as the option appearing in the Invoice Bill of the Mobile Phone regarding the refund, was concerned, Commission opined that since there was a gap of only 16 days from the date of change of policy, i.e. 07-02-2017 and purchasing of mobile phone, i.e. 23-02-2017, it was not possible to rectify the said mistake or reprint the Invoice Bill.

Therefore, present matter was not a fit case for awarding exemplary punitive damages and action/inaction of the OP did not warrant any punishment. [Paras Jain v. Amazon Seller Services (P) Ltd., 2021 SCC OnLine NCDRC 312, decided on 22-09-2021]

Utt HC | Wife not eligible for medical examination of whether she can conceive or not during Divorce proceedings; Court allows appeal 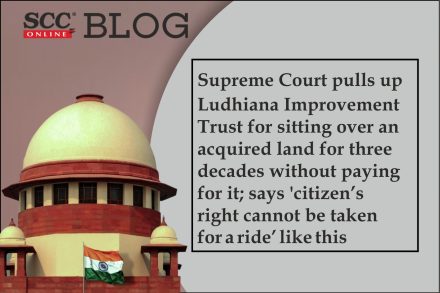 Supreme Court pulls up Ludhiana Improvement Trust for sitting over an acquired land for three decades without paying for it; says ‘citizen’s right cannot be taken for a ride’ like this

By Prachi Bhardwaj Published on September 7, 2022