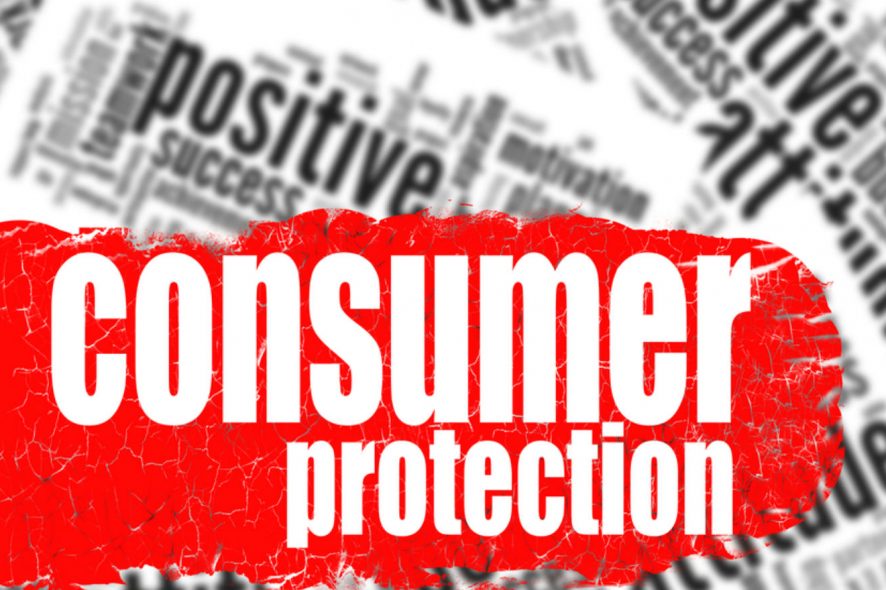 State Consumer Disputes Redressal Commission (SCDRC), Chandigarh: While deciding the instant appeal filed by VLCC Health Care Ltd. against the order of the District Consumer Court whereby they were directed to refund and compensate the respondent for the mental agony caused due to the failure of VLCC's weight loss program; the Bench of Raj Shekhar Attri, J. (President) and Rajesh K. Arya (Member) observed that VLCC's act of giving false assurances on one hand by way of misleading advertisements, and on the other hand obtaining a declaration from the consumers qua no guarantee/assurance regarding the result and outcome of the program, is a clear example of unfair trade practices adopted by them, and for which the consumers cannot be made to suffer at their hands. “The appellants are very much held liable to refund the amount paid by the respondent purely on the basis of their own advertisement, ‘Lose 4 Kgs in 30 days or take your money back!'”.

Facts of the case: In March 2015, the respondent took VLCC's weight loss program (A)+(B) for reduction of 5 kg weight and 4-inch loss of tummy circumference within one month, and paid advance for the program amounting to Rs. 50,000. The respondent visited VLCC for the sittings as detailed by them but there was no visible result. The respondent even discussed the matter with VLCC stating that he had undertaken 30 sessions but there has been no progress on weight loss, and he could manage to lose 1Kg by diet control only, and thus sought refund.

In order to allure the respondent, VLCC showed him an imported costly machine through which the treatment would be done. Thus, the respondent was induced to take up the program and money back guarantee and pay another amount of Rs.28,000 again on 31-03-2017. However, upon observing no improvement in weight loss and inch reduction, the respondent took the matter to the concerned Court.

It was submitted that the respondent had given a specific undertaking duly signed by him that he understands that no guarantee could be given to him regarding the result and outcome of the program and in circumstances of unsatisfactory results due to factors beyond the control of the staff of VLCC, he shall not be entitled to claim/damages or to hold VLCC or its staff liable.

Per contra, the respondent contended that the plea of VLCC with regard to disclaimer cannot be accepted in view of the fact that they specifically mentioned that “Lose 4 kgs in a month or your money will be refunded”, which clearly shows that VLCC were misguiding the consumer by a misleading advertisement and in case they don't lose weight then puzzle them in disclaimer clause which is a clear case of deficiency in service.

Atul Goyal, Advocate, for the appellants;

Harsh Nagra, Advocate, for the respondent. 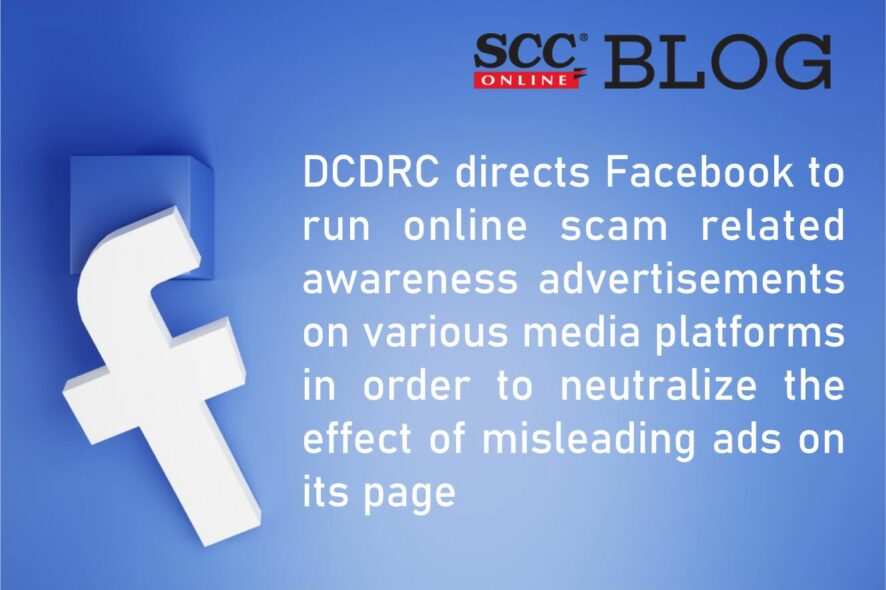 District Consumer Disputes Redressal Commission (DCDRC), Gondia: In the instant ‘unique’ complaint, relief in the nature of directions to Facebook were sought vis-a-vis discontinuation of unfair/ restrictive trade practices; not putting up misleading advertisements and neutralization of the effect of misleading advertisements on their platform. The coram of Bhaskar B. Yogi (President) and Sarita B. Raipure (Member) directed Facebook and Meta Inc. to run scam related awareness advertisement on various media, social sites, TV and OTT platforms to create awareness regarding various scam on regular basis to neutralize the impact of misleading advertisements. The Commission also stated that Facebook has a legal and social duty and obligation to provide funding to a step-by-step service to aid and advise the public regarding online frauds and scams.

Facts of the case: The complainant who hails from Maharashtra, is a daily wager coming from Below Poverty Line Family and currently remains unemployed due to Covid19 pandemic. Facebook (opposite party) is a major social networking site.

Thereafter the complainant tried to bring this fraud to the notice of Facebook (via Twitter and then e-mail) and sought compensation of Rs. 7568, but Facebook never replied. Therefore the complainant was compelled to knock the doors of the District Commission, Gondia, against Facebook.

Contentions: The counsels of the complainant put forth the following contentions-

Per-contra, the opposite parties (Facebook/ Meta) argued on the following points-

Observations: Based on the facts and contentions presented in the case, the Commission framed certain important issues and made the following observations-

Decision/Directions: Perusing the facts and contentions presented by the parties and making the afore-stated observations, the Commission partly allowed the complaint and made the following directions-

M. B. Ramteke, Advocate, for Opposite Parties.

Present Consumer complaint under Section 2(1)(d)(i) read with Section 12(1)(c) of the Consumer Protection Act had been filed against Amazon Seller Service Private Limited seeking refund of the amount of Rs 9,119 paid towards purchase of Mobile Phone along with litigation and transportation cost of Rs 1 lakh and Punitive Damages to the tune of Rs 7,43,00,00,000 for causing legal injury and financial loss to the complainant and other innumerable consumers.

Complainant purchased a mobile phone from OP. It was contended that after using the Mobile Phone for a couple of days, it started heating up which compelled him to return the same as per the Easy Return Policy of the OP advertised on T.V. Serial, Media and Print Media.

Since, the Complainant was not able to click the option of Return/Exchange on their website, he called the Customer Support of the Opposite Party and was informed that they had changed its Return Policy on the items purchased.

Complainant sent an email to the OP stating that they had always advertised about Easy Returns and that at the time of purchase, it had not been mentioned that the Refund/Return Policy of the Opposite Party has been changed which amounted to Unfair Trade Practice on their part. Vide an email the OP apprised to the Complainant that if he had received a defective/damaged Phone, he would be eligible only for free replacement and not for a refund.

Further, in the invoice bill of the phone along with the order list, the option of returning the phone was given.

Hence, he stated that the action/inaction of the OP was in violation of the Right of Consumers to be informed about the product and to decide as to whether to purchase the same or not.

Complainant alleged that the OP was involved in Unfair Trade Practice by making a false promise and running misleading advertisement about Easy Refund of the Product. The OP was bound to disclose all the necessary information about its Product enabling the Consumers to take a decision as to whether buy the said product or not.

Commission while referring to the decision of Supreme Court in Magma Fincorp Ltd. v. Rajesh Kumar Tiwari, (2020) 10 SCC 399, answered the question as to whether the punitive damages claimed by the complainant can be treated as part of the compensation for determining the pecuniary jurisdiction of the commission.

In the said decision it was held that the Punitive damages cannot be treated as a form of compensation.

Punitive damages under Section 14(1)(d) of the Act cannot be granted by the Consumer Fora in cases of breach of contract unless the act is so reprehensible that it calls for punishment of the party in breach, by imposition of punitive or exemplary damages.

In the instant matter, Bench stated that some of the purchasers are purchasing the products on the online website and after using the said product for a few days, seek a refund of the amount paid by them.

The above was the reason why OP changed its policy of Easy Return.

Commission added that, in case the Complainant had received the defective mobile phone, the remedy was still available with him to get it replaced despite the change in Return/Refund Policy”.

OP had published in the newspaper, namely the Indian Express about the change in its Return Policy with the Heading “Amazon no longer has a return and get refund policy for mobiles” along with this, the said information was also published in NDTV Gadget 360 with the heading that “Mobile Purchased from Amazon India No longer Eligible for Return”

In so far as the option appearing in the Invoice Bill of the Mobile Phone regarding the refund, was concerned, Commission opined that since there was a gap of only 16 days from the date of change of policy, i.e. 07-02-2017 and purchasing of mobile phone, i.e. 23-02-2017, it was not possible to rectify the said mistake or reprint the Invoice Bill.

Therefore, present matter was not a fit case for awarding exemplary punitive damages and action/inaction of the OP did not warrant any punishment. [Paras Jain v. Amazon Seller Services (P) Ltd., 2021 SCC OnLine NCDRC 312, decided on 22-09-2021]