Supreme Court: A Division Bench comprising of Hemant Gupta and A.S. Bopanna, JJ. reversed the conviction of the accussed−appellant who was convicted for the murder of her husband’s first wife and their children. The Supreme Court held that the chain of circumstantial evidence was not complete, and gave her benefit of doubt.

The appellant was married to one Gulab, who was already married to Mandabai (deceased). Gulab and Mandabai had two children, one son and a daughter. The appellant, her husband, the deceased, the children, appellant’s parents-in-law, and their servant, all lived together in one house. The prosecution’s case was that on the intervening night of 2nd and 3rd August 2006, at about 2:30 to 3:00 am, an incident of fire occurred at their house and it was engulfed into flames. The appellant who was also in the house, came out unscathed. Mandabai and her daughter rushed out of the house with burn injuries, while her son burnt to death inside the house. Appellant’s husband and mother-in-law were not present, while her father-in-law was sleeping outside the house who woke up in confusion, instructed the servant to call a jeep, and shifted Mandabai and her daughter to hospital. Unfortunately, both Mandabai and her daughter died on the next day due to burn injuries.

Appellant’s father-in-law lodged a complaint and implicated her. She was then prosecuted. The Sessions Court found her guilty and convicted her under Sections 302 (Punishment for murder) and 436 (Mischief by fire) IPC. On appeal preferred by the appellant, the Bombay High Court reappreciated the evidence and discarded the alleged extra-judicial confession made by the appellant to her father-in-law and further disbelieved the evidence of the father-in-law which was relied on by the Sessions Court. However, in the ultimate analysis, the High Court concluded that the appellant was guilty and her appeal was accordingly dismissed. Aggrieved, the appellant approached the Supreme Court.

The Supreme Court was of the opinion that there is no doubt that if the incident that occurred, if caused by someone with intention to cause death, is certainly gruesome and unpardonable. However, in the instant case where the appellant was proceeded against mainly based on extra-judicial confession alleged to have been made to her father-in-law, and the said evidence of the father-in-law having been disbelieved by the High Court as not trustworthy, the issue would be as to whether the chain of circumstances to convict the appellant was complete.

The Supreme Court extracted the reasons assigned by the High Court and found that it held the appellant guilty more on preponderance of probability rather than reaching a conclusion beyond reasonable doubt. The High Court’s reasoning was based on conjectures and surmises. The sole circumstance noted by the High Court was that the burnt frock of the deceased daughter of Mandabai was sent for chemical analysis and kerosene residue were detected on it. In that circumstance, the High Court held that kerosene was used for setting Madabai’s daughter on fire.

The Supreme Court was of the view that even if the such chemical report is accepted, there was nothing on record to connect that the appellant was responsible for sprinkling kerosene or for kerosene to have come in contact with the frock of Mandabai’s daughter. Further, in her declaration to the police after the incident, Mandabai herself disclosed there was a kerosene lantern in the house. Evidence indicated that diesel used for tractor was also kept in the house. Therefore, it could not be said beyond doubt that it was not an accident but the appellant had set fire by sprinkling kerosene. Following the law laid down in Sharad Birdhichand Sarda v. State of Maharashtra, (1984) 4 SCC 116, the Court reiterated that:

“The position of law is well settled that the links in the chain of circumstances is necessary to be established for conviction on the basis of circumstantial evidence.”

The Court further observed that mere suspicion would not be sufficient, unless the circumstantial evidence tendered by the prosecution leads to the conclusion that it “must be true” and not “may be true”. Reliance was placed on Devilal v. State of Rajasthan, (2019) 19 SCC 447.

The Court found that the Session’s Court as well as the High Court had made suspicion the reason for convicting the appellant without there being any strong basis. It was reiterated that:

“The suspicion, however strong, cannot take place of proof.”

It was noted that there were equal circumstances which raise a doubt whether the appellant could be held guilty only because she was not injured in the incident. The Court said that natural human conduct is that when there is any incident or accident, the immediate reaction is to get away from the scene and save oneself. The Court was of the view that if in the middle of the night, for whatever reason, there was fire and if the appellant had woken up and noticed it a little earlier, the natural conduct was to run out of the house instead of going into the house which was burning, to check on the other inmates. It was observed:

“It takes a person a lot of courage or be overdriven with compassion to get back into the house to save somebody else and not doing so may be considered morally wrong for not coming to aid of fellow human being in distress, but cannot be a circumstance to hold a person guilty of a crime which is as serious as murder unless the other circumstances in the chain point to the accused so as to lead to an irresistible conclusion of being guilty.”

The Court also noted that Mandabai who came out alive and lived for a day did not blame or suspect anybody including the appellant. Her declaration was clear that the house caught fire and she and her children were caught in the fire. She did not state that the fire set on her spread to the house. Further, it was an admitted fact that the servant also lived in the same house, but he too was not injured. Hence, the Court held:

“Therefore, not being injured alone cannot be held as a circumstance to hold one guilty of having set fire to the house.”

Next, according to the High Court, appellant’s motive behind the crime was that her husband executed a document of maintenance out of certain property in favour of Mandabai a day before his second marriage with the appellant. The Supreme Court found itself unable to accept this. The marriage between the appellant and his husband had been registered after an arrangement for maintenance for the first wife, Mandabai, which is a normal thing in such circumstances and it could not be held as a strong motive for the alleged crime.

Lastly, on the point of appellant’s failure to explain the reason for eruption of fire in view of the obligation to explain under Section 106 (Burden of proving fact especially within knowledge) of the Evidence Act, 1872, the Court held that appellant’s obligation to explain would have arisen only if there was any other evidence to the effect that the appellant was already awake and was outside even before the fire erupted.

Thus, in totality of facts and circumstances of the case, the Court was of the opinion that the appellant was entitled to be acquitted as the benefit of doubt weighs in her favour. Accordingly, the judgment of the High Court affirming conviction and sentence ordered by the Sessions Court was set aside. [Parubai v. State of Maharashtra, 2021 SCC OnLine SC 566, decided on 10-8-2021] 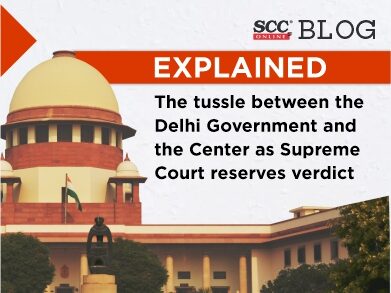 Pat HC | Delay of 3 years in making payment under Right to Fair Compensation Act found not bona fide; amount at the rate of 9% simple interest granted