Supreme Court: In a postscript to its 188-pages long judgment in Ajit Mohan v. Delhi Legislative Assembly (wherein it was held that representatives of Facebook will have to appear before the Committee constituted by Delhi Legislative Assembly for looking into Facebook’s role in aggravating Delhi Riots which broke out last year), the 3-Judge Bench of Sanjay Kishan Kaul, Dinesh Maheshwari, and Hrishikesh Roy, JJ. stressed upon the need for timely disposal of cases. The way forward, in dealing with the likely post-COVID surge in number of cases pending adjudication, was also discussed.

The Court said that the purpose of the postscript was only to start a discussion among the legal fraternity by bringing to notice the importance of succinctly framed written synopsis in advance, and the same being adhered to in course of oral arguments to be addressed over a limited time period and more crisp, clear and precise judgments so that the common man can understand what is the law being laid down.

The Court expressed that COVID times have been difficult. The judiciary and the bar are no exception. It was noted that this was a contributing factor in there being a period of four months between reserving the judgment and pronouncing the order in the Ajit Mohan case. But this was not the only reason. The “saga of hearing” lasted 26 hours ─ which the Court said is “a lot of judicial time”. Daily time period was recorded. Apart from pleadings, there were written synopses, additional written synopses, rejoinders and replies filed liberally by both parties. The convenience compilations themselves were very voluminous, in contradiction to their very purpose.

Concern of the Court was if this is how the proceedings will go on in the future, “it will be very difficult to deal with the post-COVID period, which is likely to see a surge in the number of cases pending adjudication”. The Court then discussed “the way forward”.

The Court said it believes that there needs to be clarity in the thought process on what is to be addressed before the Court. Counsels must be clear on the contours of their submissions from the very inception of the arguments. This should be submitted as a brief synopsis by both sides “and then strictly adhered to”.

The Court said that much as the legal fraternity would not want, restriction of the time period for oral submissions is an aspect that must be brought into force.

“Instead of restricting oral arguments it has become a competing arena of who gets to argue for the longest time.“

Looking into this aspect, the Court then referred to a few international best practices including Article 6 of the European Convention on Human Rights ─ which while recognising the right of fair trial and public hearing, qualifies it inter alia to be completed “within a reasonable time”. This is intrinsically linked to administering justice without delays.

The Court said that delay in judicial proceedings has been the bane of our country and there cannot be a refusal to part ways from old practices especially when they have outlived their purpose. It is the litigants who bear the costs of our complex and prolonged adjudicatory process.

The Court was conscious of the “equal responsibility of this side of the bench”. “It is the need of the hour to write clear and short judgments which the litigant can understand”, the Court said. It was advised that:

“The Wren & Martin principles of precis writing must be adopted.”

But then, the Court was perplexed, as to how this is to be achieved if the submissions itself go on for hours on end with vast amounts of material being placed before the Court; with the expectation that each aspect would be dealt with in detail failing which review applications will be filed.

Use of Judicial Precedents

The Court noted that it is weighed down by judicial precedent. Often a reference is made to the judgment of the Privy Council or the earlier years of the Supreme Court which saw short and crisp judgments, but then the volume of precedents the Court faces today was not present then. In today’s technological age, all that is required is to instruct the junior counsel to take out all judgments on a particular point of view and submit it to the Court in a nice spiral binding. On every aspect, there may be multiple judgments.

The Court was of the opinion that if the proposition of law is not doubted by the Court, it does not need a precedent unless asked for. If a question is raised about a legal proposition, the judgment must be relatable to that proposition ─ and not multiple judgments. The other scenario is if the facts of the cited judgments are so apposite to the facts of the case that it could act as a guiding principle.

The contribution to the development of law can be nurtured by comprehensible precedent. There may be times when the complexity of matters gives rise to complex opinions. But the judgments are becoming more complex and verbose only on account of large number of precedents cited and the necessity to deal with them and not merely refer to them as is done in other countries.

The Court recorded that case management has been discussed for long, but seldom is it followed in its true letter and spirit. This may possibly be because of the large volumes of cases, but then this is all the more reason for better management.

Referring to the US Supreme Court,  it was noted that there the norms and the traditions take care of the requirement of restrictive time frames to address submissions; which are preceded by the contours of arguments given in the written synopsis and the material sought to be relied upon.

The Court did not doubt that lawyers think on their feet but then, the Court said:

“[G]iven the current milieu, there has to be clarity before the lawyers get on their feet keeping a little leeway in mind for something which may evolve during the arguments.“

As of 1-5-2021, the Supreme Court of India had 67,898 pending matters. The Court expressed that the time spent on routine matters leaves little time to settle legal principles pending before larger Benches that may have an impact down the line on the judicial system.

While concluding, the Court noted that another matter of concern is prolonged interim proceedings. In criminal matters, even bail matters are being argued for hours together and at multiple levels. The position is no different in civil proceedings where considerable time is spent at an interim stage when the objective should be only to safeguard the rights of the parties by a short order, and spend the time on the substantive proceedings instead which could bring an end to the lis rather than on the interim arrangement. In fact, interim orders in civil proceedings are of no precedential value. It was noted by the Court that this is the reason it is said that:

“[W]e have become courts of interim proceedings where final proceedings conclude after ages ─ only for another round to start in civil proceedings of execution.“

The Court ended by stating that by this post script it intended to start a discussion among the legal fraternity on the issues touched upon. [Ajit Mohan v. Delhi Legislative Assembly, 2021 SCC OnLine SC 456, decided on 8-7-2021]

HP HC | Court while discharging its duties in exercise of powers conferred under Art. 226 r/w Art.227 of Constitution, cannot permit illegality to remain on record, especially in exercise of its power of superintendence

All HC | If a minor girl marries a major of her freewill, will such marriage be void or voidable? Court explains while discussing validity of child marriage 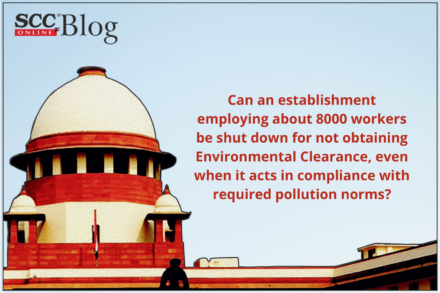 Can an establishment employing about 8000 workers be shut down for not obtaining Environmental Clearance, even when it acts in compliance with required pollution norms? SC answers