The petitioner, Ms Rajina Parbin Sultana was booked under Sections 120B/124A IPC and Section 2 of the Prevention of Insult to National Honour Act, 1971 and had been in custody since 16-05-2021. The petitioner was accused of using the Indian National Flag as a table cloth on the occasion of the Eid festival when a picture of hers having lunch on that dining table with some guests went viral on social media. Pursuant to the said incident several allegations were made against the petitioner of willfully dishonouring the Indian National Flag.

The petitioner had submitted before the Court that out of the 6 (six) accused persons named in the FIR, 5 (five) of them had already been released on bail. It was argued that even if the accusations made in the FIR were prima facie accepted to be true, the same could not be brought within the purview of the offence under Section 124A, IPC.

On the other hand, the State submitted that the accused-petitioner was the host for the lunch which was held in her house, on 14-05-2021 when the alleged act was committed. It was submitted that there was ample evidence that the accused petitioner had used a table cloth resembling the Indian National Flag while inviting guests to her house on the occasion of Eid festival.

Noticing that the sentence was to the effect that the accused-petitioners were under 30 from a middle-class background and therefore had the clout to influence the investigation”; and considering that the said incident was an unintentional mistake, the Court accepted the defence argument with the suggestion to the petitioner to exercise more care and caution in future. The Bench stated that the question of whether the accused-petitioner, by her act had, committed the offence under Section 2 of the Prevention of Insult to National Honour Act, 1971 in any public place or any other place within public view is to be considered on the basis of the materials collected during the course of the investigation and its admissibility during the course of the trial. Hence,

“It did not prima facie suggest to be an act to have the affect of subverting the Government by bringing that Government into contempt or hatred or creating disaffection against it.”

Advocate for the Respondent: PP, ASSAM 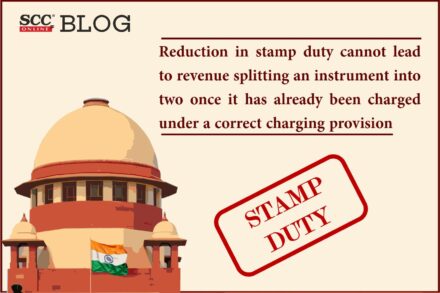 Reduction in stamp duty cannot lead to revenue splitting an instrument into two once it has already been charged under a correct charging provision: Supreme Court