Maharashtra Real Estate Regulatory Authority, Mumbai: Coram of Dr Vijay Satbir Singh (Member I), while laying out certain significant observations with respect to the provisions of RERA decided the complaint revolving around delayed possession of flat.

By preferring the present complaint, complainants sought directions from the MahaRERA to the respondent to pay the interest for the delayed possession under Section 18 of the Real Estate (Regulation & Development) Act, 2016 (RERA) in respect of booking their respective flats in the respondent’s project.

Respondent failed to hand over the possession of the flat on time. Complainants sought payment of interest for the delayed possession and further stated that even after the respondent sold more than 50% of the units, it failed to form the association of allottees/ society of allottees till date. The respondent has also failed to execute the deed of conveyance with the complainants along with the other allottees of the project.

Further, it was alleged that the respondent was yet to hand over and allot the parking spaces to respective allottees and was demanding permission from the allottees to utilize the additional FSI and construct the additional floors.

Complainants further stated that they have signed the possession letter and have received the possession of their respective flats in the month of December 2019, though respondent was not ready to allot the parking as well as to form the society of the allottees.

Since the respondent did not hand over the possession of the flats to the complainants and violated the provisions of Section 18 of the RERA and the Rules made thereunder.

Bench did not accept the reasons cited by the respondent for the delay in possession of the flat and apparently the respondent promoter wanted to apply convenient clauses in the agreement to take undue benefits after commencement of the RERA.

Formation of Society and Execution of Conveyance Deed

As per Section 11(4)(e) of the RERA, promoter is liable to enable the formation of society within 3 months of the majority of allottees having booked their flats.

In the present matter, more than 51% of the allottees booked their flats and the full occupancy certificate had been obtained for the said project, hence it was statutory duty of respondent promoter to form a society of the allottees and the respondent had no authority to lay down any condition for the same as it was not permissible under RERA.

MahaRERA opined that the present project was registered with MahaRERA after commencement of the RERA and hence provisions of RERA would apply for this project.

Hence, as per Section 14 of the RERA, any change or modification in the sanctioned plan required mandatory consent of the allottees and therefore, if respondent wanted to modify plans including the construction of 4th floor, then it had to be obtained through requisite consent of allottees.

Adding to the above, MahaRERA held that the respondent was liable to pay interest for the period of delay in accordance with the terms and conditions of the agreement.

Selling of the Car Parking

stated that there is an explicit provision under RERA that promoter can sell only covered car parking by charging a certain amount. Open Parking had to be handed over to society, it could not be sold in the open market.

Therefore, complainant allottees and respondent promoter were bound by the said provision. 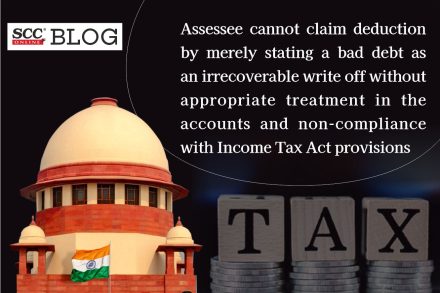 Assessee cannot claim deduction by merely stating a bad debt as an irrecoverable write off without appropriate treatment in the accounts and non-compliance with Income Tax Act provisions: SC

By Prachi Bhardwaj Published on August 30, 2022