Constitutional Court of South Africa: In a significant judgment delivered last month, the South African Apex Court, with a ratio of 8:2, declared the Regulation of Interception of Communications and Provision of Communication-Related Information Act (hereinafter RICA) to be unconstitutional, due to lack of privacy safeguards. The Court also held that that collection and monitoring of individuals’ communications under RICA contravened Section 14 of the Constitution of the Republic of South Africa. Having declared RICA unconstitutional, the Court limited the retrospectivity of its declaration of invalidity and suspended its declaration of invalidity for three years in order to allow Parliament adequate time to proceed with its investigations and develop suitable remedial legislation.

AmaBhungane Centre for Investigative Journalism NPC and its managing partner, Stephen Patrick Sole (also an investigative journalist who was under State- surveillance), had approached the High Court of South Africa (Gauteng Division, Pretoria), challenging the constitutionality of RICA, wherein Mr. Sole recapitulated his first hand experience with RICA. In 2008 he suspected that his communications were being monitored and intercepted. In 2009 he took steps to obtain full disclosure of the details relating to the monitoring and interception of his communications from the Office of the Inspector-General of Intelligence. The efforts proved to be fruitless because the Inspector-General had found the National Intelligence Agency (NIA) and the crime intelligence division of the police not guilty of any wrongdoing. It was stated that RICA prohibits disclosure of information relating to surveillance; therefore Mr Sole could not be furnished with the information. Stephen Sole was thus left in the dark as to whether his communications had in fact been intercepted and, if so, what the basis for interception was.

The High Court upon perusal of the facts and the relevant provisions, declared RICA to be unconstitutional based on some of the following grounds (these grounds also formed the core issues which were then addressed by the Constitutional Court)-

However, the declaration of invalidity was suspended for two years to allow Parliament to cure the defects. Interim relief, in the form of reading-in, was granted in respect of the notification issue (i), the independence issue (ii) and the practising lawyers and journalists issue (iv).

The Majority judgment was authored by Madlanga J., (with Khampepe J, Majiedt J, Mathopo AJ, Mhlantla J, Theron J, Tshiqi J and Victor AJ concurring). The Majority observed that that interception and surveillance of an individual’s communications under RICA provisions are highly invasive of privacy, and thus infringes Section 14 of the Constitution. Acknowledging the constitutional importance of privacy, the Bench noted that Right to Privacy is tied to dignity. Analyzing impugned legislation in the backdrop of Section 36(1) of the Constitution, the Court observed that even though one of the important purposes of State surveillance is to investigate and combat serious crime, guarantee national security, maintain public order, thereby ensuring the safety of the Republic and its people, however in light of the intrusive nature of the limitation, the Court must question that whether RICA is doing enough to reduce the risk of unnecessary intrusions? In other words, are there safeguards that acceptably minimise the trampling of the privacy right, thereby meeting the standards of reasonableness and justifiability?

On the notification issue (i), the Majority held that such a blanket prohibition facilitates the abuse of interception directions, which are applied for, granted and implemented in complete secrecy. The fact that the subject never knows whether they are under observation and thus there is no opportunity to seek legal redress for the violation of her or his right to privacy. This renders the rights guaranteed the Constitution to approach a court to seek appropriate relief for the infringement of the right to privacy, as illusory and, promotes impunity.

Dealing with the independence issue (ii), the Court observed that that the open-ended discretion in respect of appointments and their renewal could raise a reasonable apprehension that the independence of the Designated Judge may be undermined by external interference by the Executive. As a result, RICA does not allow the Designated Judge an adequate level of structural, operational or perceived independence. RICA was therefore declared unconstitutional to the extent that it fails to ensure adequate safeguards for an independent judicial authorisation of interception.

Dealing with the issue of inadequate safeguards (iv), the Court considered the applicant’s concerns revolving around the lack of regulation as to how intercepted information is handled, stored and eventually destroyed and how this deficiency exposes subjects of interceptions to even more aggravated intrusions into their privacy. The Court noted that RICA provisions do not prescribe the relevant procedures, and that they allow the Director of the Office for Interception Centres an unacceptable unrestrained discretion to regulate the management of information. Thus RICA was declared unconstitutional to the extent that it fails adequately to prescribe procedures to ensure that data obtained pursuant to the interception of communications is managed lawfully and not used or interfered with unlawfully.

Regarding the lawyers and journalists issue (also iv), the Majority acknowledged that the confidentiality of journalists’ sources is protected by the rights to freedom of expression and the media. The Court also acknowledged that legal professional privilege is an essential part of the rights to a fair trial and fair hearing. These rights weigh in favour of special consideration being given to the importance of the confidentiality of lawyer-client communications and journalists’ sources, in order to minimise the risk of infringement of this confidentiality. RICA’s failure to provide such special circumstances makes it violative of the Constitution.

The Dissenting opinion penned by Jafta J., (with Mogoeng CJ., concurring) noted that that RICA does not empowers the Minister of Justice to designate a judge for the purposes of determining applications for authorisation to intercept private communications and also to perform other functions. It was held that the definition in Section 1 of RICA does not include a provision that the Minister has the power to designate but merely defines the meaning of the term “designated judge”. Consequently, it was held that the suspension of the declaration of invalidity proposed as a remedy is inappropriate as it will not cure the problem of the lack of power to designate. This kind of problem can only be remedied by Parliament granting the Minister the relevant power.[AmaBhungane Centre for Investigative Journalism NPC v. Minister of Justice and Correctional Services, 2021 SCC OnLine CCSA 1, decided on 04-02-2021]

Ker HC | “There is gulf of difference between consent and submission”; HC affirms conviction of person accused of raping his own daughter

Bom HC | The day on which accused refused to accept the demand notice is to be excluded while counting the 15 days period contemplated under S. 138(c) NI Act 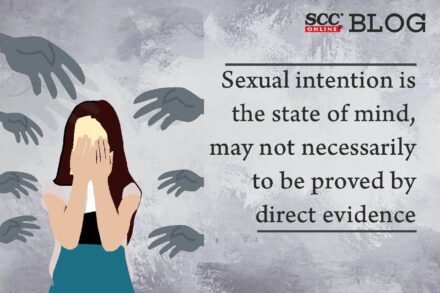 Touching ‘bum’ of a minor girl will be sexual assault punished under S. 10 of POCSO Act? POCSO Court explains