Central Administrative Tribunal (CAT):  Aradhana Johri, Member (A), partly allowed the instant application whereby the applicant had sought for issuance of directions for the release of gratuity and leave encashment which had been illegally withheld by the respondent.

“(1)(c) No gratuity shall be paid to the Government servant until the conclusion of the departmental or judicial proceedings and issue of final orders thereon.”

The Tribunal relied on Mahanadi Coalfields Ltd. v. Rabindranath Choubey, 2020 SCC OnLine SC 470, wherein the Supreme Court had held that it was permissible for the employer to withhold the payment of gratuity even after the employee had attained his superannuation from service because of the pendency of disciplinary proceedings against him in view of Rule 34.3 of the Rules, 1978, the employer had a right to withhold gratuity during pendency of disciplinary proceedings.

Further, the Tribunal observed that 39 (3) reads as follows:

“(3) The authority competent to grant leave may withhold whole or part of cash equivalent of earned leave in the case of a Government servant who retires from service on attaining the age of retirement while under suspension or while disciplinary or criminal proceedings are pending against him.”

Consequently, the Tribunal ordered that leave encashment of 286 days should be paid to the applicant since the plea of money becoming recoverable had not been taken by the respondents. However, the demand of the applicant for release of gratuity and interest had been rejected.[Baldev Singh v. Union of India, O.A. 879 of 2020, decided on 02-03-2021] 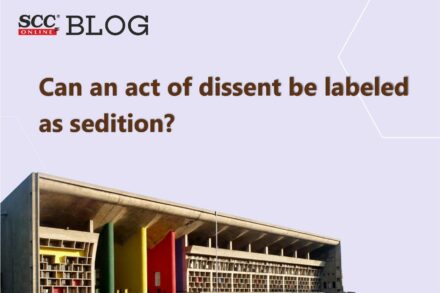 Can an act of dissent be labeled as sedition? P&H HC analyses

Utt HC | There have to be very substantial and compelling reasons for setting aside a judgment of acquittal; petition dismissed