Patna High Court: Anil Kumar Upadhyay, J., addressed the instant petition challenging the termination of the contract by State on the ground of non-issuance of 15 days prior notice as mandated by contract. The Bench said,

“If the action is found to be arbitrary, the State cannot take a plea that the State and its functionary are free to act according to its own standard.”

On 27-09-2018 the petitioner had entered into an agreement with Superintending Engineering, NH Circle for the work of strengthening and widening of two lanes with paved shoulder from Km 181.465 to Km 201.665 of NH-120. A dispute arose between them on the issue that despite the expiry of 90 days the defect pointed out by the petitioner was not cured and working front and forest clearance was not provided as required for initiation of work. On 28-05-2019, the petitioner invoked clause 23.2.1 of the agreement and requested the respondent for termination of the agreement.

Several correspondences were made between the petitioner and the respondents on the issue of forest clearance and providing work site for carrying construction work and blame game on each other started. On 20.03.2020, the respondent terminated the agreement on the ground of petitioner’s failure to carry construction work, despite several opportunities and a fresh tender was issued in the favour of a third party.

The petitioner had challenged the validity of said order by which the respondents had decided to terminate the engineering procurement and construction agreement dated and to forfeit performance bank guarantee and additional bank guarantee dated 15-10-2018.

Reliance was placed by the Court on the principle laid down by US Court in Vitarelli v. Seaton, 1959 SCC OnLine US SC 87. Applying the aforesaid proposition of law, the Court observed that, the State action had to be judged at the touch stone of the terms and conditions of the agreement and on scrutiny it was found that the State had failed to comply its part of the obligation in terms of Clause 23.1.2 of the contract which required 15 days prior termination notice.

The Bench cited ABL International Ltd. v. Export Credit Guarantee Corporation of India, (2004) 3 SCC 553, wherein it had been held that arbitrary action of termination of contract is amenable to jurisdiction under Article 226 of the Constitution. The Bench expressed that the action of the State in termination of the agreement was not only violative of principles of natural justice but fair play. The Bench stated,

However, the Bench denied dealing with the issue of subsequent fresh tender and the successful tenderer in the fresh tender, therefore, the instant writ petition was confined to adjudication of the termination of agreement and forfeiture of performance of bank guarantee. It was held that since the respondents had acted in most arbitrary manner in terminating the contract without following the mandatory requirement of issuing notice of termination i.e. 15 days notice before taking decision to terminate the agreement, their action could not sustain. Accordingly, the order dated 20-03-2020 was quashed. It was stated,

“The State is not a favourite litigant even in the commercial activities of the State its action is to be judged at the touchstone of Article 14 of the Constitution of India.”

However, in the larger public interest and also after considering the fact that there was too much delay in construction of work, the Court denied granting any further relief to the petitioner, except payment for work if any already carried out by the petitioner in terms of the agreement and refund of performance of bank guarantee.[Birendra Prasad Singh v. State of Bihar,  2021 SCC OnLine Pat 262, decided on 08-02-2021] 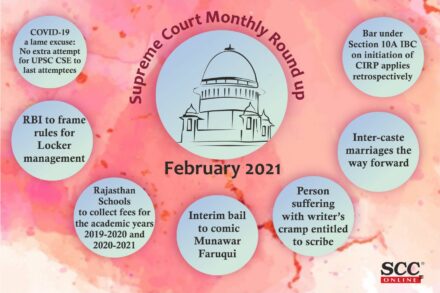 Bom HC | Not necessary for rape accused to disprove absence of consent beyond reasonable doubt; conviction for rape quashed for lack of proof