Uttaranchal High Court: Lok Pal Singh, J., allowed a writ petition which was filed seeking for a writ of certiorari to quash the impugned orders passed by respondent 2 and 3 respectively, and to issue a writ of mandamus directing the respondents to give the appointment to the petitioner on the post of Sub Inspector under the U.P. Recruitment of Dependents of Government Servants Dying in Harness Rules, 1974 (the 1974 Rules), as applicable in Uttarakhand.

The earlier petition was disposed of by a Coordinate Bench of this Court with a direction to the respondents to consider the case of the petitioner for appointment to the post of Sub-Inspector. By the impugned order respondent 2 had rejected the claim of the petitioner on the ground that the dependents of the deceased employee cannot claim appointment on a particular post as according to the judgment in State of Haryana v. Ankur Gupta, (2003) 7 SCC 704.

The Court observed that order passed by respondent 2 was passed by ignoring the directions issued by this Court in the earlier Writ Petition and the authority concerned had tried to sit over the judgment of this Court and had acted as an appellate authority, then the Court had directed to ensure the presence of the Inspector General of Police.

The Court while allowing the appeal held that in view of the provisions of Rule 8 of the 1974 Rules, the petitioner was entitled to appointment under the said Rules as per his qualification and the reasons shown by the respondents denying the claim for appointment to the petitioner on the post of Sub-Inspector were unsustainable in the eyes of law and as far as the criteria of age from 21 years to 28 years was concerned, it was made clear that the same was not applicable while giving appointment under the 1974 Rules.[Anuj Kumar Saini v. State of Uttarakhand,  2021 SCC OnLine Utt 129, decided on 06-01-2021] 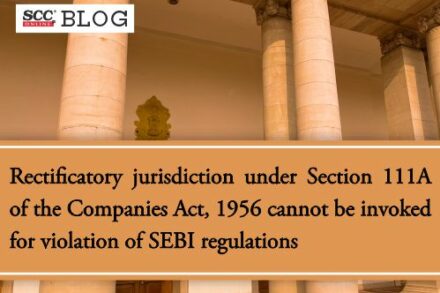 Rectificatory jurisdiction under Section 111A of the Companies Act, 1956 cannot be invoked for violation of SEBI Regulations: Supreme Court

Delhi High Court| Interpretation of an arbitration clause must be predicated upon a construction of the contract as a whole, and no particular word or phrase should be unduly emphasized to negate the clause of its true meaning