Madras High Court: G.R. Swaminathan, J., while retention of custody of an Elephant named ‘Lalitha’ to her caretaker with whom she had stayed for almost 20 years and had an emotional bonding observed that

“Just solutions to legal issues may sometimes lie outside the formal statutory framework. Judges should therefore boldly think outside the box and not feel inhibited or timid.”

The above lines were quoted since the present case pertained to “Lalitha” a female elephant, and Court found light not in the provisions of the Wild Life (Protection) Act, 1972 but in the pages of Peter Wohlleben’s “The Inner Life of Animals”.

G. Thangappan had originally purchased Lalitha and the ownership certificate for the same was issued. Later the said elephant was bought by Mohammed Aslam and sold her to Kannathu Kunju Mohammed.

Petitioner purchased ‘Lalitha’ in 2000 and the applied to seek transfer of ownership.

While the petitioner awaited for the transfer ownership the said request was rejected in March 2020 with the imposition of penalties for having transported Lalitha from one place to another without permission.

Crux of filing the instant petition

Petitioner sought rejection order in regard to the transfer of ownership to be set aside.

Section 43 (1) of the Wild Life (Protection) Act, 1972 states that no person having in his possession captive animal in respect of which he has a certificate of ownership shall transfer by way of sale or offer for sale or by any other mode of consideration of commercial nature such animal.

Section 39 (3) of the Wild Life (Protection) Act, 1972 states that no person shall, without the previous permission in writing of the Chief Wild Life Warden or the authorised officer acquire or keep in his possession, custody or control, or transfer to any person, whether by way of gift, sale or otherwise any wild animal falling within the purview of the Act.

Was the sale of Lalitha Illegal?

The significant fact noted by the Court was that there could be no dispute that the sale of Lalitha in the first place by Thiru, Thangappan was illegal and subsequent sales were also vitiated.

Since no prior permission was obtained by the petitioner for acquiring Lalitha, the said was rightly rejected and hence the bench upheld the said order to be valid.

Respondents stated that the petitioner will have to surrender possession of the animal for being shifted to the camp maintained by the Forest Department.

Bench considered the above, whether the same could be permitted or not?

Court while considering the above question observed that:

Elephants are known to be sensitive and possessed of self-awareness. They have passed what is known as “mirror test”.

German naturalist Peter Wohlleben, after years of direct, personal observation, says that animals also feel the very same emotions which the humans are capable of. Feelings of love, grief and compassion are equally found in the animals.

Article 51A (g) of the Constitution of India calls upon us to have compassion for living creatures.

Supreme Court in Animal Welfare Board of India v. A. Nagaraja, (2014) 7 SCC 547, after noting that Chapter 7.1.2 of the guidelines of World Organization of Animal Health (OIE), recognizes five internationally recognized freedoms for animals such as (i) freedom from hunger, thirst and malnutrition; (ii) freedom from fear and distress; (iii) freedom from physical and thermal discomfort; (iv) freedom from pain, injury and disease; and (v) freedom to express normal patterns of behavior declared that Sections 3 and 11 of the Prevention of Cruelty to Animals Act, 1960.

In light of the above-cited case, High Court held that Lalitha is entitled to express her normal patterns of behaviour.

Court noted that Lalitha has been with the writ petitioner for more than twenty years. In all these years, State did not intervene and take her away.  The department was issuing directives from time to time and they were complied with by the petitioner.

Further, it was noted that a Microchip has been implanted in Lalitha’s body so that her movements could be tracked. It seemed that Lalitha developed a great bonding with her caretakers.

Hence, the approach to be adopted in the instant matter is to be similar as the one in child custody cases.

Bench made a surprise inspection and found that Lalitha was being sumptuously fed and the fact that pleased the most was her not being chained at all. In fact, Lalitha looked happy and healthy.

Caretakers were questioned by the Bench in regard to Lalitha’s maintenance to which they responded that she is taken to some well-known temples and Dargas, wherein she is paid for her majestic participation, her dignity is maintained intact.

Bench in light of the above stated that there was no exploitation to which Lalitha was being subjected.

Peter Wohlleben in the chapter “In the Service of Humanity”, in his Book remarks that when the log-haulers are kind and give rest to their horses, the animals are eager to work. One can find a similar human-animal partnership with shepherds and their dogs which also follow verbal commands. This is another example of animals taking pleasure in their work, as we can clearly see if we watch sheepdogs racing around a flock of sheep to round them up (Page 251).

Further, the Court also expressed that the veterinarians appointed by the department certified that Lalitha was being maintained properly by the petitioner.

A psychological wound would be caused to Lalitha if she will be removed from petitioners’ custody. Hence the present arrangement needed to be continued.

Another significant and essential point which was noted by the Bench was that Lalitha’s usual place of stay was a coconut groove and there was an R.O. Plant as well. The said land was owned by Thiru. Pothiraj who gave in writing to the Court that the said land will not be sold during the lifetime of Lalitha.

High Court took inspiration from the following statement of law:

In light of the above passage, Court held that the administrative decision may be found to be valid in law and yet there can be no sequitur.

In the present matter,

the rights of the animal are more relevant and they determine the adjudicatory outcome and not the formal validity of the administrative order.

For the above reason, Court disposed of the petition and upheld the impugned order by directing the respondents to permit the petitioner to continue to keep the custody of Lalitha. [S.G.M. Shaa v. Principal Chief Conservator of Forests and Chief Life Warden,  2020 SCC OnLine Mad 6242, decided on 10-09-2020]

Explained| Can ITAT recall an order while exercising powers under Section 254(2) of the Income Tax Act? 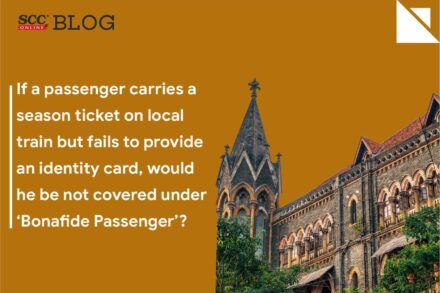 If a passenger carries a season ticket on local train but fails to provide an identity card, would he be not covered under ‘Bonafide Passenger’? Bom HC resolves