The instant petition was filed to seek a direction to decide the petitioner’s claim with regard to election proceedings of a co-operative society namely Matsya Jivi Sahkari Limited.

Standing Counsel appearing for the State respondents drew the attention of this Court to the provisions under Section 70 of the Uttar Pradesh Co-operative Societies Act, 1965 and the proviso to sub-section (1) thereof and also to Rule 444-C (2) of the Uttar Pradesh Co-operative Societies Rules, 1968, to contend that once an election of a co-operative society has been held, the remedy available to the aggrieved party is by seeking a reference of the dispute to the Registrar.

Bench noted that the manner of settlement of disputes is provided under Chapter IX of the Act, 1965.

Further, Section 70 is in respect of disputes which may be referred to arbitration and in terms thereof, the disputes specified under sub-section (1) are to be referred to the Registrar for action in accordance with the provisions of the Act and the rules and no Court shall have jurisdiction to entertain any suit or other proceedings in respect of any such dispute.

In terms of Section 70 (1), a dispute relating to an election under the provisions of the Act or the rules made thereunder, shall not be referred to the Registrar until after the declaration of the result of such election.

Adding to the above, Court also explained that Sub-rule (1) of Rule 444-C provides that the election in a co-operative society shall not be called in question either by arbitration or otherwise except on the grounds specified under clause (a) and clause (b) under sub-rule (1).

In terms of sub-rule (2) a dispute relating to an election shall be referred by the aggrieved party within forty-five days of the declaration of the result.

In the instant case, elections of the co-operative society in question were already held and the results thereof were also declared.

In view of the aforesaid facts and situation, any complaint, grievance or dispute which is being sought to be raised with regard to the elections, is to be referred to the Registrar on an appropriate application by the aggrieved party.

High Court in light of the above discussion of provisions held that:

“Any grievance, complaint or dispute relating to the election proceedings of a co-operative society can be called in question on the grounds specified under sub-rule (1) of Rule 444-C by applying for a reference by making an appropriate application under Section 70 of the Act, 1965.”

Since the whole mechanism with regard to the settlement of disputes in regard to a co-operative society election has been provided, Court is not inclined to exercise extraordinary jurisdiction under Article 226 of the Constitution of India.

Bom HC | Reiteration by husband of cruelty inflicted by mother-in-law held sufficient to quash acquittal for offence under S. 498-A IPC 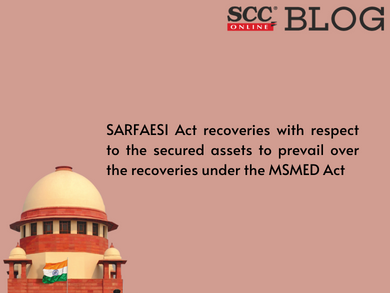 SARFAESI Act recoveries with respect to the secured assets to prevail over the recoveries under the MSMED Act: Supreme Court

MP HC | Do the revenue authorities have jurisdiction to decide the correctness and genuineness of a “Will”? Court explains