Supreme Court: The bench of AM Khanwilkar and Sanjiv Khanna, JJ refused to quash the FIRs registered against News18 Journalist Amish Devgan for using the term “Lootera Chisti” in one of his shows but has granted interim protection to him against arrest subject to his joining and cooperating in investigation till completion of the investigation.

While holding this, the bench made an attempt to define “hate speech” albeit it was of the opinion that a universal definition of ‘hate speech’ remains difficult, except for one commonality that ‘incitement to violence’ is punishable.

Here are 15 notable excerpts from the judgment that runs to 128 pages: 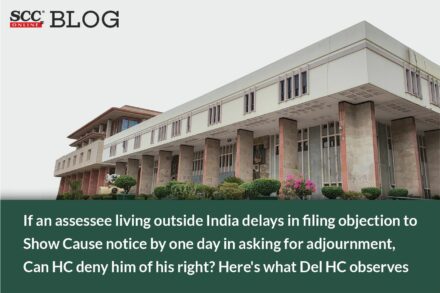 If an assessee living outside India delays in filing objection to Show Cause notice by one day in asking for adjournment, Can HC deny him of his right? Here’s what Del HC observes

NCLAT | Can Banks debit amounts from Corporate Debtor Company after Moratorium Order? Is there an obligation of releasing ‘title deeds’ under Resolution Process? Read on