The writ petition was filed seeking to challenge a communication where the petitioner has been directed to deposit an amount pursuant to an enquiry report within a specified time period failing which proceedings for recovery would be initiated against him.

The Court observed that there was nothing in the impugned order or in the enquiry report to show that any opportunity of hearing was afforded to the petitioner before passing the aforesaid order and also during the course of the enquiry. The Court explained that,

“In administrative law the principle of audi alteram partem has been held to be a fundamental principle of the rules of natural justice. This requires the maker of a decision to give prior notice of the proposed decision to the persons affected and an opportunity to make a representation. The exercise of a power which affects the rights of an individual must be exercised in a manner which is fair and just and not arbitrarily or capriciously. An administrative order involving civil consequences must necessarily be made in conformity with rules of natural justice. Any decision which has been made without compliance of the aforementioned fundamental principle of natural justice i.e. the rule of audi alteram partem, cannot be sustained.”

The Court held that the impugned order being violative of the rule of audi alteram partem which is a fundamental principle of natural justice was unsustainable. The Court disposed of the writ petition with a direction to the respondent to issue a show cause notice to the petitioner within three weeks.[Jai Ram Yadav v. State of U.P., 2020 SCC OnLine All 1362, decided on 18-11-2020] 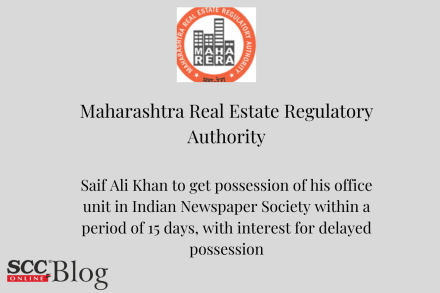 Maharashtra RERA| Saif Ali Khan to get possession of his office unit in Indian Newspaper Society within a period of 15 days, with interest for delayed possession