The present writ petition is sought by a Civil Servant of the State, challenging an order dated 12-08-2020, made by, the Kalaburagi bench of the Karnataka State Administrative Tribunal (‘KSAT’), denying relief against the unilateral termination of his deputation by the borrowing department (RDPR) on the ground of ‘efflux of time.’ The series of events are categorically stated hereunder:

The Court made significant remarks with respect to deputation in public services.

Citing the Supreme Court decision in, State of Punjab v. Inder Singh, (1997) 8 SCC 372, wherein it was said, “Concept of deputation is well understood in service law and has a recognized meaning. Deputation has a different connotation in service law and the dictionary meaning of the word deputation is of no help. In simple words, deputation means service outside the cadre or outside the parent department. Deputation is deputing or transferring an employee to a post outside his cadre, that is to say, to another department on a temporary basis. After the expiry period of deputation the employee has to come back to his parent department to occupy the same position unless in the meanwhile he has earned promotion in his parent department as per recruitment rules. Whether the transfer is outside the normal field of deployment or not is decided by the authority who controls the service or post from which the employee is transferred. There can be no deputation without the consent of the person so deputed.”

The Court further cited Rule 50 of the Karnataka Civil Services Rule, which reads as,

“50(1). When a Government Servant is permanently transferred or deputed from one department to the other, under the provisions of Rule 16 of General Recruitment Rules, 1977, he will draw pay in the new post at the same stage in which he was drawing in the old post and earn the next increment on the date on which he would have earned it had he continued in the old post.”

While issuing the writ of certiorari, the Court directed respondents 1 & 2 to restore the petitioner to the office which he had held on deputation immediately preceding the impugned notification dated 27-02-2020. It further said that the borrowing department has sent the petitioner back to the parent department abruptly and unilaterally, without any prior consultation with the lending department, which infact, is in deep contravention of the service rules.[C.B. Chikkalagi v. State of Karnataka, WP No 226384 of 2020, decided on 28-09-2020]

Physical relations on Promise to Marry| Long term relationship with intent of marriage ended on hostile terms, would it be covered under S. 376(2)(n) IPC? Del HC explains

NHRC sets aside contention of Telangana Govt., recommends it to pay Rs. 6 lakh as relief in a botched up eye surgery incident 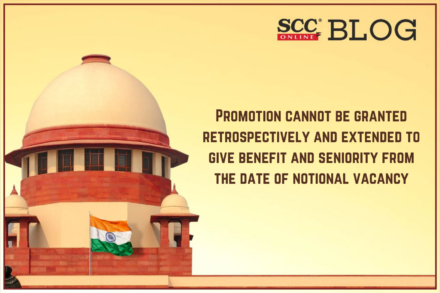 Promotion cannot be granted retrospectively to give benefit and seniority from the date of notional vacancy: SC