Rajasthan High Court: Arun Bhansali, J., rejected a stay application that was filed aggrieved by the order of the Director, Mines demanding penalty, revoking sanction and passing debarring order against the petitioner.

It was submitted that the petitioner pursuant to the e-auction notification for collection of excess royalty and DMFT amount on masonry stone participated, being a petitioner was granted the contract and was required to fulfill the requirements as indicated successful bidder, However, on account of lockdown imposed due to COVID-19 pandemic, needful could not be done by the petitioner and he requested the respondents to grant time for fulfilling the requirements of the office wherein, he was required to do the needful within 15 days. Thus, the petitioner had sent a communication seeking extension of date for signing the agreement ‘without penalty’ which was responded to by the mining engineer who had asked to do the needful in 3 days along with the penalty. The petitioner again had asked for the waiver of penalty consequently the matter was forwarded to the Director, Mines for taking action under the provisions of Rule 45 of the Rajasthan Minor Mineral Concession Rules, 2017 (‘the Rules, 2017’). In the order passed by the Director the bid security amount was forfeited, the sanction was revoked and the petitioner was debarred from participating in the forthcoming auction.

The Court while rejecting the stay application explained that in the over all circumstances of the case where the formalities had to be completed in 15 days taking into consideration the effect of lockdown, and the prayer made by the petitioner seeking exemption from payment of amount of penalty was declined he was required to do the needful including payment of amount of penalty, the submission that as the communication was a recommendation only, the petitioner had no cause at that stage cannot be accepted inasmuch as insofar as the prayer made regarding exemption from payment of the amount of penalty is concerned stood rejected, which had provided cause to the petitioner. The Court added that the petitioner was not vigilant enough to seek his remedy in relation to the grievance as raised in the writ petition.[Bhaniyana Construction v. State of Rajasthan, 2020 SCC OnLine Raj 1386, decided on 30-09-2020] 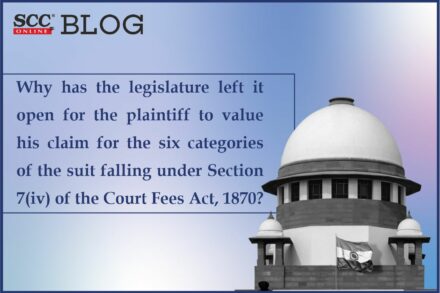 Explained| Why has the legislature left it open for the plaintiff to value his claim for the six categories of the suit falling under Section 7(iv) of the Court Fees Act, 1870?

Family Courts are not allowed to enlarge the scope of enquiry under S. 13-B(2) of the Hindu Marriage Act 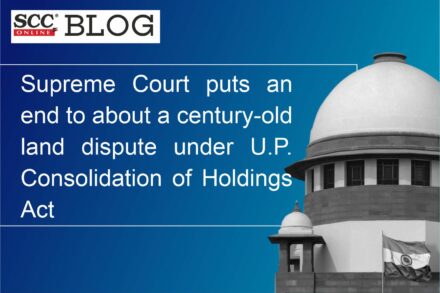 Supreme Court puts an end to about a century-old land dispute under U.P. Consolidation of Holdings Act