Supreme Court: The bench of UU Lait and Indira Banerjee, JJ has explained that Section 12 of the Specific Relief Act, 1963 has to be construed in a liberal, purposive manner that is fair and promotes justice.

“A contractee who frustrates a contract deliberately by his own wrongful acts cannot be permitted to escape scot free.”

While hearing a case relating to sale of land in the year 1984, the Court held that Section 12 of the Specific Relief Act is to be construed and interpreted in a purposive and meaningful manner to empower the Court to direct specific performance by the defaulting party, of so much of the contract, as can be performed, in a case like this.

“To hold otherwise would permit a party to a contract for sale of land, to deliberately frustrate the entire contract by transferring a part of the suit property and creating third party interests over the same.”

The Court explained that the relief of specific performance of an agreement, was at all material times, equitable, discretionary relief, governed by the provisions of the Specific Relief Act 1963. Even though the power of the Court to direct specific performance of an agreement may have been discretionary, such power could not be arbitrary. The discretion had necessarily to be exercised in accordance with sound and reasonable judicial principles.

Referring to suits relating to sale of land, the Court explained that

“an agreement to sell immovable property, generally creates a right in personam in favour of the Vendee. The Vendee acquires a legitimate right to enforce specific performance of the agreement.”

Jhar HC | “Is the police taking side by not bringing victim in witness box?” HC comes down heavily on authorities for discrepancies in sexual assault case, warns authorities of contempt proceeding

P&H HC | DRT has jurisdiction under S. 5 of Limitation Act to condone delay if application filed with Securitization Application 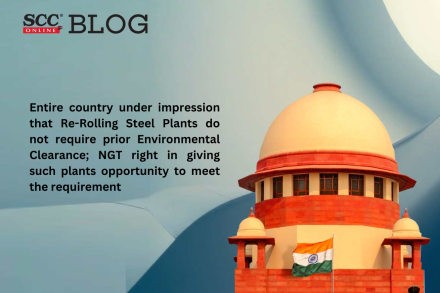 Entire country under impression that Re-Rolling Steel Plants do not require prior Environmental Clearance; NGT right in giving such plants opportunity to meet the requirement: SC