Supreme Court: Dealing with the authority of the “Monitoring Committee to seal the residential premises on the private land” particularly when they are not being used for the “commercial purpose”, the 3-judge bench of Arun Mishra, BR Gavai and Krishna Murari, JJ has held that the Monitoring Committee is not authorized to take action concerning the residential premises situated on the private land. If there is unauthorized construction or in case of deviation, the requisite provisions are under the Delhi Municipal Corporation Act, 1957 (DMC Act), such as sections 343, 345, 347(A), 347(B).

In the order reported in (2004) 6 SCC 588 in this case, this Court considered the question of regularization of illegal industrial activities in the context of a violation of Master Plan and industrial activities in residential non­-conforming areas of Delhi. Requisite directions were issued for closure or relocation of industrial units non­confirming with the ecological balance considering the right of a hygienic, clean and safe environment. The Monitoring Committee was appointed and empowered in 2006 by this Court to take action within the powers conferred vide judgment in M.C. Mehta v. Union of India, (2006) 3 SCC 399. The Monitoring Committee was authorized to take care of the unauthorized colonies, and the Special Task Force was directed to remove the encroachments from the public roads and public streets.

Considering it’s order dated 7.9.2018 where the Court had specifically noted in the aforesaid paragraph that the Monitoring Committee is doing it’s best to remove the encroachments/ unauthorized constructions or misuse of the property, The Court said that but that the same relates to the encroachments on the public land and unauthorized colonies, and at no point of time this Court has authorized the Monitoring Committee to take action concerning residential premises which were standing on the private land and were not being misused.  The aforesaid observations are not with respect to the Committee’s authorization but have to be read in the context of the purpose for which the Monitoring Committee had been appointed.

When asked to give it’s considered opinion specifically as to whether at any point in time in the past, it sealed any residential premises, which were not misused for commercial purposes, the Monitoring Committee kept silent on this aspect and did not cite even a single such instance.

It further noticed that the power of sealing of property carries civil consequences. A person can be deprived of the property by following a procedure in accordance with law.  The Monitoring Committee is not authorized to take action concerning the residential premises situated on the private land. If there is unauthorized construction or in case of deviation, the requisite provisions are under the DMC Act, such as sections 343, 345, 347(A), 347(B).   The mode of action and adjudication under the Act is provided including appellate provisions and that of the Tribunal.

It noticed that when the Monitoring Committee is not empowered to take action, the incumbents could not have   been deprived of the due process of protection in accordance with law.  As against the action of the Monitoring Committee, no appeal lies elsewhere. Even High Court is not authorized to entertain any matter and scrutinize its action, such is the drastic step taken by this Court by  way of an exceptional measure in public interest, and it is confined to the misuse of residential property for commercial purpose and encroachments and unauthorized construction on the public land, roads.

“Article 300A of the Constitution provides that nobody can be deprived of the property and right of residence otherwise in the manner prescribed by law.  When the statute prescribes a mode, the property’s deprivation cannot be done in other modes since this Court did not authorize the Committee to take action in the matter. An action could have been taken in no other manner except in accordance with the procedure prescribed by law.”

Del HC | We, as citizens of Delhi are pained at state of affairs and as Judges find situation as reported and if true, to be highly dissatisfactory and violative of rights of dead; Suo Motu cognizance of a news report 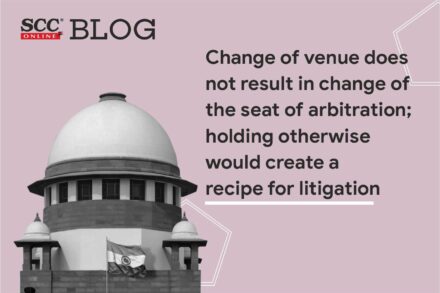 Change of venue does not result in change of the seat of arbitration; holding otherwise would create a recipe for litigation: Supreme Court

Utt HC | Cash can be deposited in lieu of surety bond as per S. 445 of CrPC for attainment of bail: Order of rejection duly quashed