Central Information Commission (CIC): Exercising the power under Section 25(5) of the Right to Information Act, 2005 (“RTI Act”), Vanaja N. Sarna, Information Commissioner, issued an advisory to Secretary, Department of Personnel and Training (“DoPT”), to evolve a system to take immediate steps towards providing a platform for implementation of Section 7(1) of the RTI Act.

The Commission was seized of the matter where the complainant had sought certain documents in relation to meetings of Sports/Admission Committee (academic year 2018-19) of Daulat Ram College, University of Delhi. He was aggrieved by the alleged arbitrary rejection of 16 girls of Daulat Ram College. It was mentioned that the complainant faced the issue of making an online application under Section 7(1) through the online portal of DoPT to the public authority “University of Delhi”, as the said portal did not provide the facility of the same. He relied on the Supreme Court decision in CBSE v. Aditya Bandopadhya where it was held that right to information is a cherished right. It is a formidable tool in the hands of responsible citizens to fight corruption and bring in transparency and accountability.

The Commission was of the view that it is imperative upon public authorities to make available to each citizen a platform to file “Life and Liberty” RTI applications. Notably, the proviso to Section 7(1) of RTI Act provides that where the information sought for concerns the life and liberty of a person, the same shall be provided within 48 hours of the receipt of the request. The time frame for replying to other requests is within 30 days.

In view of the above, the Commission issued an advisory under Section 25(5) of RTI Act to the Secretary, DoPT, to evolve a system after coordinating with the Director General, National Informatics Centre (“NIC”), in the spirit of the RTI Act and take immediate steps towards providing a platform for implementation of Section 7(1) of RTI Act.

It was further observed by the Commission: “Due to the ongoing pandemic of coronavirus in the country and the prevalent lockdown, the Commission finds it appropriate to highlight the issue of Section 7(1) implementation by citizens more so when postal receipt of RTI applications are minimal, in such situations all public authorities should encourage RTI application through email in case of life and liberty matter.”

The Commission suggested that a unique email id can be created by the CPIOs in this regard and reflected on their respective websites. A method of online fees also has to be though of in this regard. In so far as other normal RTIs are concerned, the RTI portal can be used. The Deputy Registrar was directed to circulate the order widely to the public authorities relate to the Registry. [Mohit Kumar Gupta v. CPIO, University of Delhi, CIC/DoP&T/C/2018/628739/MoHRD/03274, decided on 22-4-2020] 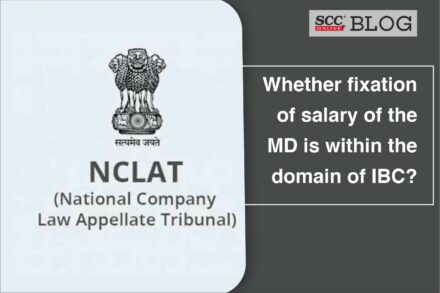 Whether fixation of salary of the MD is within the domain of IBC? NCLAT explains