Constitution of India — Arts. 25 and 26 — Religious practices — Funeral and death ceremonies as per Zoroastrian/Parsi religion: In this case, petitioner permitted, on compassionate grounds, to attend funeral prayers and death ceremonies of parents inside prayer hall of Bungli (Bungalow) of the Towers of Silence Complex at Valsad, as per memorandum of agreement between petitioner and respondents. This met immediate requirement of petitioner and her sisters. Others rights to be adjudicated at a later stage. [Goolrokh M. Gupta v. Burjor Pardiwala, (2020) 2 SCC 705]

Civil Procedure Code, 1908 — Or. 8 R. 1 — Power to condone delay in filing written statements beyond the prescribed period of 90 days qua non-commercial suits — Continuance of: The amendment to Or. 8 R. 1 CPC by the Commercial Courts Act, 2015 i.e. providing for mandatory nature of the timeline prescribed for filing of written statement and lack of discretion with courts to condone any delay, is not applicable to non-commercial suits. Post coming into force of the Commercial Courts Act, there are two regimes of civil procedure: whereas commercial disputes [as defined under S. 2(c) of the Commercial Courts Act] are governed by CPC as amended by S. 16 of the said Act, all other non-commercial disputes fall within the ambit of the unamended (or original) provisions of CPC. Further, as regards the timeline for filing of written statement in a non-commercial dispute, held, the unamended Or. 8 R. 1 CPC continues to be directory and does not do away with the inherent discretion of courts to condone certain delays. [Desh Raj v. Balkishan, (2020) 2 SCC 708]

Army Rules, 1954 — Rr. 180, 179, 182 and 22 — Procedure for enquiry where character of person subject to Act is involved: Proceedings of court of inquiry are in nature of fact-finding conducted at pre-investigation stage and accused is entitled to full opportunity to participate in proceedings. Further held, final order is on basis of trial by court martial and hence, irregularities at earlier stages cannot be basis for setting aside order passed by court martial. Where ground for non-compliance with R. 180 is raised by accused during framing of charge or during recording of summary of evidence, authorities have to rectify defect as compliance with procedure prescribed in R. 180 is obligatory. [Union of India v. Virendra Kumar, (2020) 2 SCC 714]

Service Law — Reinstatement/Back Wages/Arrears — Reinstatement without back wages — Removal for failure to join transferred place of posting: In this case, petitioner approached CAT after three years of order of removal and approached Supreme Court under Art. 32 of the Constitution after almost 9 yrs of accrual of cause of action. The Supreme Court held, considering that petitioner had directly approached Supreme Court under Art. 32 of the Constitution, it would not be appropriate to examine correctness of order of removal. However, considering that order of removal constitutes harsh disciplinary measure, in peculiar circumstances of case, in interest of justice order of Central Government to treat period of absence as “dies non” modified, and though petitioner held not entitled to arrears of salary for period of absence, his salary directed to be fixed by granting him notional increments as and when accrued. Since petitioner had failed to join his place of posting, nor did he approach Court at relevant time or even after his removal contemporarily conceding benefit of arrears of salary, seniority, continuity, etc. would not be fair. [Mangilal Kajodia v. Union of India, (2020) 2 SCC 723]

Penal Code, 1860 — S. 302: In this case, there was murder of wife in her own home past midnight when appellant was alone with her. Circumstantial evidence pointed to the guilt of appellant and there was no explanation of incriminating evidence. Defective investigation was held to be not vitiative of prosecution case, in present case, hence, conviction was confirmed. [Nawab v. State of Uttarakhand, (2020) 2 SCC 736]

Citizens, Migrants and Aliens — National Register of Citizens of India in State of Assam (NRC): In this case, Union of India was of view that children would not be separated from their parents who have been given citizenship through NRC. [Assam Public Works v. Union of India, (2020) 2 SCC 741]

Criminal Procedure Code, 1973 — Ss. 439 and 437 — Bail — Rejection and cancellation of — Distinction between: Rejection of bail stands on one footing but cancellation of bail is a harsh order because it interferes with liberty of individual and hence it must not be lightly resorted to. [Myakala Dharmarajam v. State of Telangana, (2020) 2 SCC 743]

Air Force Act, 1950 — S. 52(c) r/w Para 804(b) of Air Force Regulations, 1964 r/w Ss. 154 and 5 CrPC — Inapplicability of CrPC to matters covered by Air Force Act: In this case registration of FIR for alleged offence of theft and misappropriation of kerosene and diesel, committed by Air Force personnel from Diesel and Petrol Store of Air Force, held, was not mandatory since CrPC is inapplicable to matters covered by Air Force Act which is a special law conferring jurisdiction and powers on court martial. Finding recorded by Tribunal that it was mandatory for authorities to report offences to civil police for registration of FIR, unsustainable. Para 804(b) of Regulations makes it clear that reporting of offence of theft to civil police is optional and only when circumstances warrant, competent authority may do so. [Union of India v. Chandra Bhushan Yadav, (2020) 2 SCC 747]

Infrastructure Laws — Telecommunication Laws — Telecom Agreement/Telecom Licence/Spectrum Allocation/Scams/Auction/Licence Fees: In this case, Respondent licensees’ liability towards payment of deferred spectrum charges, in May 2018, was to the tune of Rs 774.25 crores. Since these deferred instalment charges could not be made within the time granted, the Union encashed bank guarantees to the tune of Rs 908.91 crores as against the actual amount of Rs 774.25 crores. In this case, rejecting the contention of the Union that there were subsequent defaults or short payments in respect of liability towards later periods, held, that there was no rationale for the Union to resist the demand for refund of excess amounts. Thus, the order of TDSAT directing Union to return the unadjusted amount of Rs 104.34 crores, upheld. [Union of India v. Reliance Communication Ltd., (2020) 2 SCC 756]

Education Law — Employment and Service Matters re Educational Institutions — Appointment/Recruitment — Right to appointment — Appointment to post of Vice-Principal: In this case there was selection of respondent-petitioner by the Selection Committee for appointment as Vice-Principal approved by governing body but rejected by University vide letter dt. 13-1-2006 since prior approval of University as mandated by Cl. 4(4) of Delhi University Ordinance XVIII was not taken and also manner in which College was appointing Acting Principal. The Supreme Court held that though Cl. 4(4) mandates that prior approval from University before making appointment must be taken but on most occasions it was noticed that approval had been granted post facto. In such circumstances, rejection of respondent’s appointment was not justified, more so, when his candidature was approved by governing body and he was eligible. Further, resolution of expanded governing body of College dt. 29-2-2016 noting that respondent-petitioner was illegally holding post of Acting Principal and hence, recommending appointment of seniormost teacher as Principal was to deny respondent benefit of appointment of Vice-Principal to which he was entitled. Furthermore, apprehension that if respondent becomes Acting Principal by virtue of being Vice-Principal, he would not allow appointment of regular Principal baseless since it is only when appellants fail in their duty to appoint Principal, Cl. 7(3) of Ordinance XVIII would be applicable and respondent entitled to act as Principal in terms thereof — Respondent entitled to be appointed as regular Vice-Principal. [Swami Shraddhanand College v. Amar Nath Jha, (2020) 2 SCC 761]

Criminal Procedure Code, 1973 — S. 227 — Discharge of accused — When warranted — Scope of S. 227 CrPC:Relevant considerations by court at that stage, discussed. Governing principles regarding permissibility of defence of accused or documents produced by him, summarized. [M.E. Shivalingamurthy v. CBI, (2020) 2 SCC 768]

Armed Forces Tribunal Act, 2007 — Ss. 30, 15 and 3(f) — Appellate jurisdiction of Supreme Court — Scope of interference with order of substituted punishment passed by Tribunal: Supreme Court in exercise of its appellate jurisdiction under S. 30, held, would be slow in interfering with substituted punishment unless order passed by Tribunal is patently illegal, warranting interference. [Union of India v. R. Karthik, (2020) 2 SCC 782]

Juvenile Justice (Care and Protection of Children) Act, 2000 — S. 7-A — Juvenility — Effect of rejection of plea of: The plea of juvenility cannot be reagitated. S. 7-A of the JJ Act stipulates that an application can be filed before any court at any stage including the stage after the final disposal of the petition. However, once a convict has chosen to take the plea of juvenility before Magistrate, High Court and also before the Supreme Court and the said plea has been rejected up to Supreme Court, the petitioner cannot be allowed to reagitate the plea of juvenility by filing fresh application under S. 7-A of the JJ Act. [Pawan Kumar Gupta v. State (NCT of Delhi), (2020) 2 SCC 803] 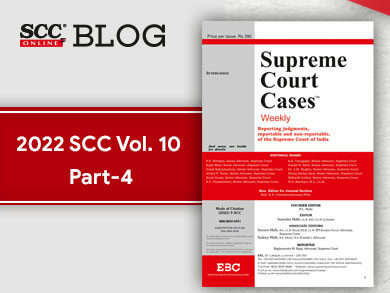