Supreme Court: The Court will start from March 17 the final hearing on the petitions challenging the constitutional validity of a Maharashtra law, which grants reservation to the Maratha community in education and jobs.

A bench of Justices L Nageswara Rao and Deepak Gupta refused to pass an interim order and said,

“We will hear on March 17, no adjournment will be granted and all pleadings will be completed by then. We will hear the matter finally and pass the order. We are not staying it. Already there is an order that all appointments will be subject to the outcome of this petition,”

The bench was hearing two appeals, including one filed by J Laxman Rao Patil challenging the Bombay High Court order that upheld the constitutional validity of the quota for the Maratha community in education and government jobs in Maharashtra. During the hearing of the case in the top court, senior advocate Gopalshankar Narayan appearing for the petitioner asked the bench to stay the High Court order as the reservation today is 65 per cent in education and 62 per cent in jobs, exceeding 50 per cent cap in total reservation.

The Bombay High Court had on June 27, 2019, said the 50 per cent cap on total reservations imposed by the Supreme Court could be exceeded in exceptional circumstances.

Another appeal filed by advocate Sanjeet Shukla, a representative of “Youth for Equality”, said the Socially and Educationally Backward Classes (SEBC) Act, 2018, enacted to grant reservation to the Maratha community people in jobs and education, breached the 50-per cent ceiling on reservation fixed by the Supreme Court in its judgment in the Indira Sawhney case.

The Maharashtra Assembly had, on November 30, 2018, passed the Maratha Reservation Bill which extended 16 per cent reservation in educational
institutions and government jobs to the Maratha community. 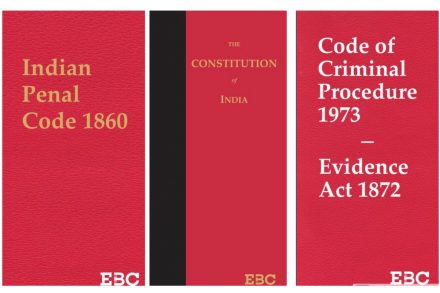 Don’t have the EBC’s Coat Pocket Edition of Constitution of India, IPC & CrPC yet? Head over to the EBC Webstore to get your copy soon!