“Bowed by the weight of centuries, he leans upon his hoe and gazes on the ground the emptiness of ages in his face and on his back, the burden of the world.”

Bombay High Court: These lines from Nehru’s autobiography were quoted by Ranjit More, J. in the judgment delivered for himself and Bharati H. Dangre, J. to describe the social status of the Maratha community and the need of a solution to the peculiar problem brought before the Court. In a 487-pages long Judgment, the High Court upheld the validity of the Maharashtra State Reservation (of seat for admission in educational institutions in the State and for appointments in the public services and posts under the State) for Socially and Educationally Backward Classes (SEBC) Act, 2018 providing reservation for the Maratha community. However, at the same time, the Court held that the quantum of reservation at 16% was not justifiable and therefore the same was partially set aside.

The Court was dealing with a batch of writ petitions posing a challenge to the SEBC Act which categorise Marathas as ‘Socially and Educationally Backward Class’ and confers 16% reservation in their favour in the seats for admission in educational institutions and to the posts for appointments in public services in the State of Maharashtra. One of the prime contentions of the petitioners was that the said Act was a fraud on the Constitution as it hiked the reservation available in the State of Maharashtra from 52% to 68% and thereby crossed the barrier of the ceiling limit of 50% imposed by the Supreme Court in Indra Sawhney v. Union of India, 1992 Supp (3) SCC 217.

The Government of Maharashtra justified the enactment of SEBC Act as being warranted by these extraordinary circumstances — (a) Gradual deterioration in educational and social backwardness of Marathas; (b)Deterioration in income as well as the desperation of families to survive; (c) Substantial  backlog in services under the State; (d) Increase in the number of suicides as a result of form indebtedness and shift to manual labour; (e) Inability to raise the standard of living as a result of adverse conditions.

The Court considered the question — Whether the SEBC Act, 2018 is constitutionally invalid on account of lack of legislative competence on the following sub-heads: (a) the subsisting interim order passed by the Bombay High Court in Sanjeet Shukla v. State of Maharashtra, 2014 SCC OnLine Bom 1672, thereby granting stay to a similar enactment and ordinance of the State, which was pending for adjudication before the Court; (b) the Constitution (102nd Amendment) Act, 2018 depriving the State legislature of its power to enact a legislation determining the Socially and Educationally Backward Class and conferring the benefits on the said class in exercise of its enabling power under Articles 15(4) and 16(4) of the Constitution as now such classes are those as declared under Article 342-A of the Constitution; (c) the limitation of 50% reservation set out by the Constitution Bench of the Supreme Court in Indra Sawhney.

Conclusions of the Court

The conclusion of the High Court on various points as formulated and deliberated upon are summarised in seriatim:

(i) The State possesses the legislative competence to enact the Maharashtra State Reservation (of seats for  admission in educational institutions in the State and for appointments in the public services and posts under the State) for Socially and Educationally Backward Classes (SEBC) Act, 2018, and the interim order passed by the Bombay High Court in Sanjeet Shukla v. State of Maharashtra, 2014 SCC OnLine Bom 1672. We resultantly uphold the impugned enactment except to the quantum of reservation as set out in Point 6.

(ii) The report of the Maharashtra State Backward Class Commission under the Chairmanship of Justice Gaikwad is based on quantifiable and contemporaneous data and it has conclusively established the social, economic and educational backwardness of the Maratha Community and it has also established the inadequacy of representation of the Maratha Community in public employment/posts under the State. Accordingly, the MSBCC Report is upheld.

(iii) The classification of the Maratha class into “Socially and Educationally Backward Class” complies the twin test of reasonable classification permissible under Article 14 of the Constitution of India — namely, (a) intelligible differentia and (b) rational nexus to the object sought to be achieved.

(iv) The limit of the reservation should not exceed 50% however in exceptional circumstances and extraordinary situations, this limit can be crossed subject to availability of quantifiable and contemporaneous data reflecting backwardness, the inadequacy of representation and without affecting the efficiency in administration.

(v) The report of the Gaikwad Commission has set out the exceptional circumstances and extraordinary situations justifying crossing of the limit of 50% reservation as set out in Indra Sawhney v. Union of India, 1992 Supp (3) SCC 217.

(vi) The State Government in the exercise of its enabling power under Articles 15(4) and (5) and 16(4) of the Constitution is justified, in the backdrop of the report of MSBCC, in making provision for a separate reservation to Maratha community. However, the quantum of the reservation set out by the SEBC Act in Section 4(1)(a) and 4(1)(b) as 16% is not justifiable and resultantly the quantum of reservation under the said provisions over and above 12% and 13% respectively as recommended by the Commission is quashed and set aside.

While concluding its judgment, the Court stated: At present, we have dealt with the extraordinary situation with which the State is confronted with where it justified the exceeding of limit, and we, by taking consideration the exceptional circumstances, have upheld this exercise of power by the State. We hope and trust that the said situation would be reviewed by the State in the near future so that it follows the rule of caution and do not forever continue with this “Exceptional circumstances and extraordinary situation.”

Note of appreciation for the counsel 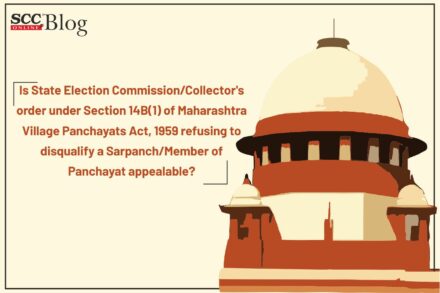 Explained| Is State Election Commission/Collector’s order under Section 14B(1) of Maharashtra Village Panchayats Act, 1959 refusing to disqualify a Sarpanch/Member of Panchayat appealable?