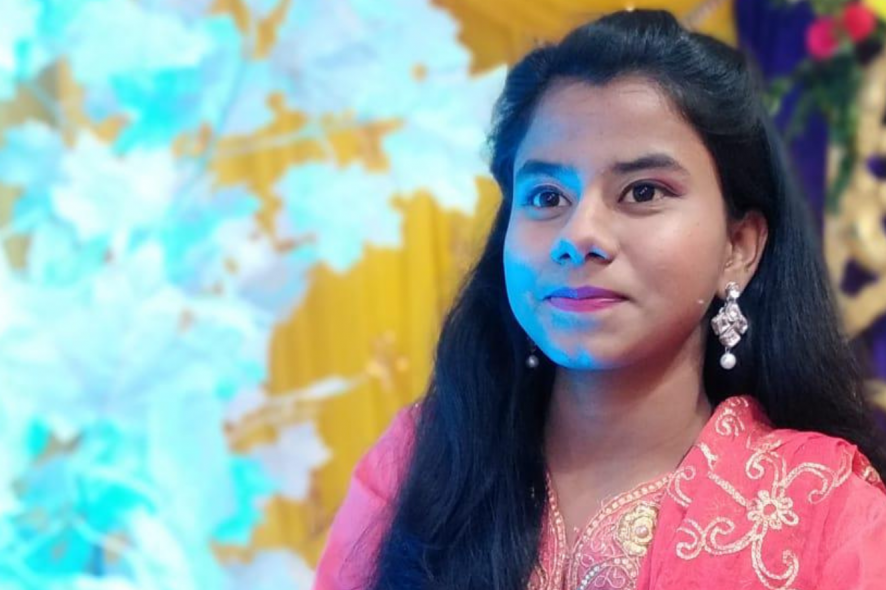 Bask into the Glory of this IDIA Scholar — Sheetal Kumari

My name is Sheetal Kumari. I come from a tribal community and belong to a lower-middle-class family. I live in a small village in Kanke, Ranchi. I live with my mother and father and have 2 sisters. I passed my tenth exam from Cambrian Public School and my twelfth from Ursuline Intermediate College, Ranchi.

I come from a community that is socially and economically backward. There is lack of awareness amongst the community members about the basic rights and duties of the citizens. This is the reason I wanted to pursue legal education so that I can work towards ensuring that all members can exercise their legal rights better by spreading awareness. There are very few girl children in my community who are getting a higher education and they are usually married at a very early age. I witnessed this kind of situation in my own village where girls are married at a very young age.

Thus, I want to get a legal education to fight for their rights. I know that our government provides many facilities for the betterment of our community but very few people get these benefits as they are not aware and also not very educated. So I want to spread awareness and make the people aware of their rights.

My father, Rajan Ram is a security guard in NUSRL, Ranchi and through the students of this college my father got to know about IDIA and he told me about this. Later I used to come to NUSRL as a trainee and many of the students helped me in preparing for CLAT. They used to give me the study material of CLAT free of cost through which I have gained a lot of knowledge about this exam. When exams were coming soon they also sent me to CLAT coaching without any fees which help me a lot in cracking CLAT.

Initially, I was very nervous on giving law entrance exam but because of the hard work of my teachers and IDIA trainees, they gave me the confidence to crack this. They taught me how to manage time and accuracy in the exam and by following their guidance, I cracked the exam and when I received the results of the exam I was very happy and satisfied. My parents were also happy with my results. All my relatives came to congratulate me and gave their blessings for my bright and better future. But I was worried about studying in a national law university where students come from high-class backgrounds. Through IDIA I got admission to NUSRL.

When I got admitted to the University I felt very lucky to get this opportunity to study in this college. The college campus is very good and the food is also very tasty. I have made 4-5 friends and they are very helpful in nature. My classmates are also very helpful. Faculty members are also very helpful and cooperative in nature. They help us in developing our overall personality. I am very enthusiastic about the coming five years and I want to get the best education and lots of good experience and opportunities in the coming years. This college has given me excellent facilities and an environment to study – exactly what I need to succeed in life.

IDIA is a pan-India movement to train underprivileged students and help transform them into leading lawyers and community advocates. IDIA is premised on the notion that access to premier legal education empowers marginalized communities and helps them help themselves. IDIA selects and trains students from underprivileged backgrounds (IDIA Trainees) to crack top law entrance examinations in India. Once they are admitted to top law colleges, it provides a scholarship to these students (IDIA Scholars) that comprises financial support, training and mentorship among other things.

Get in touch with them here: info@idialaw.org

Supreme Court: The Court will start from March 17 the final hearing on the petitions challenging the constitutional validity of a Maharashtra law, which grants reservation to the Maratha community in education and jobs.

A bench of Justices L Nageswara Rao and Deepak Gupta refused to pass an interim order and said,

“We will hear on March 17, no adjournment will be granted and all pleadings will be completed by then. We will hear the matter finally and pass the order. We are not staying it. Already there is an order that all appointments will be subject to the outcome of this petition,”

The bench was hearing two appeals, including one filed by J Laxman Rao Patil challenging the Bombay High Court order that upheld the constitutional validity of the quota for the Maratha community in education and government jobs in Maharashtra. During the hearing of the case in the top court, senior advocate Gopalshankar Narayan appearing for the petitioner asked the bench to stay the High Court order as the reservation today is 65 per cent in education and 62 per cent in jobs, exceeding 50 per cent cap in total reservation.

The Bombay High Court had on June 27, 2019, said the 50 per cent cap on total reservations imposed by the Supreme Court could be exceeded in exceptional circumstances.

Another appeal filed by advocate Sanjeet Shukla, a representative of “Youth for Equality”, said the Socially and Educationally Backward Classes (SEBC) Act, 2018, enacted to grant reservation to the Maratha community people in jobs and education, breached the 50-per cent ceiling on reservation fixed by the Supreme Court in its judgment in the Indira Sawhney case.

The Maharashtra Assembly had, on November 30, 2018, passed the Maratha Reservation Bill which extended 16 per cent reservation in educational
institutions and government jobs to the Maratha community.

Supreme Court: The Maharashtra government has filed a caveat in the Supreme Court anticipating challenge to the verdict passed by the Bombay High Court which upheld the constitutional validity of reservation for Maratha community in education and government jobs in the state. In its plea, the Maharashtra government said no ex-parte order should be passed on any plea challenging the June 27 judgement of the Bombay High Court on Maratha quota without hearing the state.

The High Court, while upholding the constitutional validity of Maratha quota, has directed that it be slashed from the present 16% to 12% and 13%, respectively. The court said the 50% cap on total reservations imposed by the Supreme Court could be exceeded in exceptional circumstances.

It also accepted the Maharashtra government’s argument that the Maratha community was socially and educationally backward, and the government was duty-bound to take steps for its progress. The High Court said while the reservation was valid, its 16% quantum was not justifiable.

The Commission, in its report, had recommended 12% quota in education and 13% in jobs for Marathas.

On November 30, 2018, the Maharashtra legislature passed a bill granting the 16% reservation to the Marathas.

Various petitions have been filed by parties including organisations like Janhit Abhiyan and Youth For Equality, challenging the validity of the Constitution (103 Amendment) Act, 2019, which paved the way for grant of quota to poor belonging to general category.

The petition, filed by Youth For Equality, has sought the quashing of the Act saying that the economic criterion cannot be the sole basis for reservation. It says that the said law violates basic feature of the Constitution as reservation on economic grounds cannot be limited to the general categories and the 50 per cent ceiling limit cannot be breached.

A similar plea has been filed by businessman Tehseen Poonawalla seeking to quash the law, saying that backwardness for the purpose of reservation cannot be defined by “economic status alone”.