Orissa High Court: A Division Bench of S.K. Mishra and Dr A.K. Mishra, JJ., dismissed a writ appeal and provided the impugned judgment does not suffer from any infirmity as the respondent-individual was denied the right of being heard and dismissed without any reason by a quasi-judicial authority.

In the instant case, an officer (respondent) working for the appellants, National Bank for Agricultural and Rural Development (NABARD) was dismissed from the service without getting an opportunity of being heard. The present writ appeal was filed by the appellants to assail the earlier judgment passed by the writ court in favour of the respondent stating the respondent was dismissed from the services without any opportunity of being heard and also, the Single Judge Bench had found that the reasons provided by the appellant was insufficient and was lacking the reasons for the dismissal.

The Senior Counsel representing the appellants, J.K. Tripathy, submitted that the delinquent officer did not avail of the opportunity provided by the appellants in course of departmental proceedings and it put forth, the respondent had not refuted any findings of the charges of the authority hence remitting the matter for a fresh consideration would not be fruitful.

The High Court upon perusal of the order by the Executive Committee noted that the order was unspeakable of the exact nature of the cause for dismissal. The Court also noted that the appellant body being a Quasi-Judicial body bears the responsibility of providing proper reasons for attaining the conclusion. With regard to the maintainability of the writ petition, the Court placed reliance on the case of S.L. Agarwal v. Hindustan Steel Ltd., (1970) 1 SCC 177 and stated that the NABARD is found to be a creation of statute and writ under Article 226 of the Constitution is maintainable. The High Court put forth that the infirmity of the impugned judgment, violation of principles of natural justice and disregard to the rules of procedure are to be dealt with separately and factually, thus it has no bearing on the maintainability of the petition. Thus, the impugned judgment does not suffer from any infirmity.[National Bank for Agriculture & Rural Development v. Durgaprasad Sangramjit Mallick, 2019 SCC OnLine Ori 203, decided on 17-05-2019]

MP HC | A writ for mandamus cannot lie to direct the State to enact a law; Petition dismissed 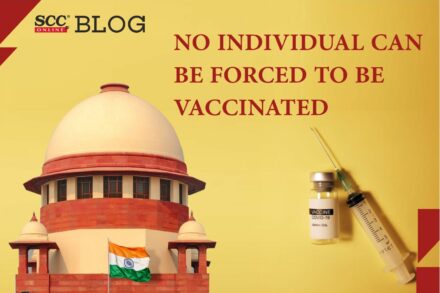 COVID-19| No individual can be forced to be vaccinated; holds Supreme Court. Restrictions on unvaccinated persons to be revised for now