Delhi High Court: Chander Shekhar, J. dismissed a criminal revision petition filed against the order of the Additional Sessions Judge whereby he refused the petitioner’s application for supply of an advance copy of the questionnaire to enable him to file the written statement in terms of Section 313(5) CrPC.

An FIR was registered against the petitioner and other co-accused persons for offences punishable under the Penal Code and the Arms Act. The matter went to trial and prosecution evidence was closed. Thereafter, the petitioner made the application as aforesaid which was rejected. Aggrieved thereby, the petitioner filed the present revision.

Ritesh Bahri and Vipin Bansal, Advocates representing the petitioner contended that he was entitled to have an advanced copy of the questionnaire. Per contra, Ashish Dutta, APP appearing for the State supported the impugned order.

The High Court was of the view: “It is a settled law that the general rule is that, an accused must answer the questions under Section 313 of the CrPC by personally remaining present in the Court and it is only in exceptional circumstances that the general rule can be dispensed with.” It was noted: “The questions under Section 313 of the CrPC are confined to the evidence already on record, the copies whereof must have been available with the accused and his counsel by that time hence, there is no need for supplying the questionnaire in advance.” In such view of the matter, it was held that there was no infirmity in the impugned order and there was no merit in the present petition, which was accordingly dismissed. [Raja v. State (NCT of Delhi), 2019 SCC OnLine Del 8652, dated 14-05-2019] 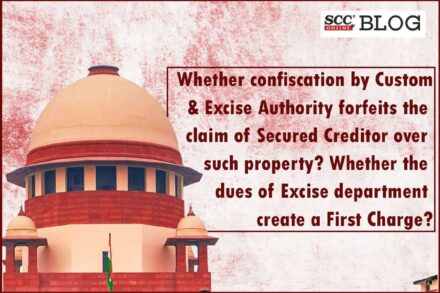 Whether confiscation by Custom & Excise Authority forfeits the claim of Secured Creditor over such property? Whether the dues of Excise department create a First Charge? SC answers