Madras High Court: G. Jayachandran, J., dismissed an appeal directed against the judgment of the first Appellate Court whereby it had reversed the conviction and sentence of the respondent-accused awarded by the trial court for an offence punishable under Section 138 of the Negotiable Instruments Act, 1881 (dishonour of cheque).

As per the appellant-complainant, he had lent Rs 10 lakhs to the accused, who issued three cheques in his favour for discharging his liability. However, on presentation to the bank, the cheques were returned dishonoured with an endorsement “account closed”. Subsequent to codal formalities, a case was filed against the accused and the trial court convicted him for an offence punishable under Section 138. On appeal by the accused, the first Appellate Court acquitted him. Aggrieved thereby, the complainant filed the present appeal.

The High Court noted that the first Appellate Court found that the cheques in question were given to the complainant for payment of taxes and compensation to tenants for vacating certain premises. And a criminal complaint was also filed against the complainant for misappropriation of blank cheques and jewels. On perusing the record, the Court held that a principal-agent relationship was clearly established between the parties. It was observed, “When there is principal-agent relationship, unless and until the material evidence are placed to prove legally enforceable debt, mere issuance of cheques cannot lead to the presumption under Section 139 of the Negotiable Instruments Act.” Stating that the trial court failed to properly consider the defense exhibits, the Court held that there was no merit in the appeal and the impugned order passed by the first Appellate Court required no interference. [G. Dhanasekar v. T.A. Jayaprakash, 2019 SCC OnLine Mad 820, decided on 19-03-2019]

Tripura High Court | It is not within the domain of the Court to direct the State- Government to create any post; Petition dismissed 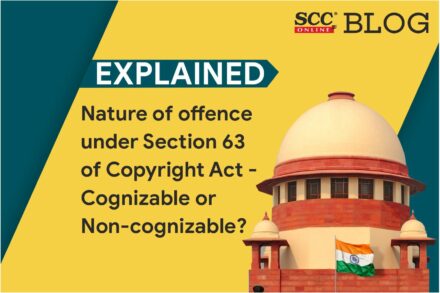 Explained| Nature of offence under Section 63 of Copyright Act – Cognizable or Non-cognizable?