Supreme Court: The bench of RF Nariman and Vineet Saran, JJ has held RCom chairman Anil Ambani guilty of contempt of court for wilfully violating its order by not paying Rs 550-crore dues to Telecom equipment maker Ericsson. It held that the RCom chiarman and Reliance Telecom chairman Satish Seth and Reliance Infratel chairperson Chhaya Virani breached the undertaking given to the apex court and the related orders. The three Reliance companies did not adhere to the 120-day deadline and the extra 60 days given by the Court to pay Rs 550 crore to Ericsson.

Some important facts were brought to the Court’s notice:

Considering the aforementioned facts, the Court noticed that the three Reliance Companies had no intention, at the very least, of adhering to the time limit of 120 days or to the extended time limit of 60 days plus. It said:

“We have seen that right from the beginning, the sum of INR 550 crore was undertaken to be paid, without having to depend upon any act or omission of a third party. To say that the sum of INR 550 crore would be paid only out of sale of assets of the three Reliance Companies is a deliberate misstatement made in the undertakings as well as the applications for extension of time filed before this Court, which was done with the purpose of circumventing the orders of this Court. We are also of the view that in the facts of the present case, wilful default is made out.”

The Court, hence, ordered that 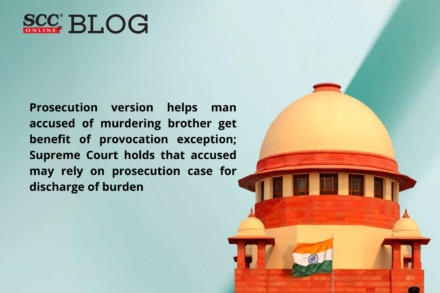 Prosecution version helps man accused of murdering brother get benefit of provocation exception; SC holds that accused may rely on prosecution case for discharge of burden