Madhya Pradesh High Court: The criminal appeal was filed before a Division Bench of P.K. Jaiswal and Anjuli Palo, JJ. by the accused to set aside the conviction and sentence passed under Section 363 of Penal Code and criminal reference to confirm death penalty awarded by First Addl. Sessions Judge, Nagod for a crime under Section 376(a)(b) of Penal Code.

Accused was convicted and was given death penalty for gruesome rape of a 4-year-old girl. Trial Court had charged the appellant under Sections 363, 376(a)(b) of Indian Penal Code and Section 5(j)(n) of Protection of Children from Sexual Offences Act. Trial Court had found him guilty. Appellant in this appeal challenged the findings of the Trial Court on the ground that there was no direct evidence against him and that its finding was contrary to the law and facts. The question before the court was whether the trial court had rightly convicted accused and whether this case comes under rarest of the rare category. High Court did not find any mistake while examining of the DNA and the testimony of the witnesses was also found to be reliable. Thus, Court viewed that Trial Court had rightly convicted appellant. Thereby, his conviction was maintained. Appellant urged that he was only aged about 28 years and had no previous criminal conviction.

High Court observed that a person who was performing the pious duty of a teacher had to nurture the character and morality in children and not commit a crime against them. Court after considering the facts and circumstances of the case along with the mitigating circumstances concluded that this case comes under the category of the “rarest of the rare case”. Therefore, this appeal was dismissed and sentenced to death penalty was affirmed. [Mahendra Singh Gond v. State of M.P., 2019 SCC OnLine MP 200, dated 25-01-2019] 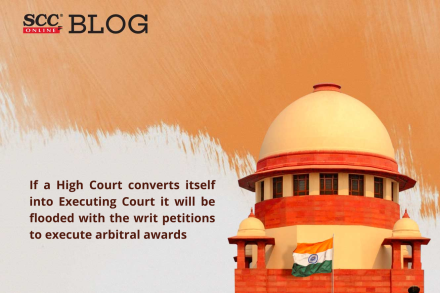 If a High Court converts itself into Executing Court it will be flooded with writ petitions to execute arbitral awards: SC

‘Hang by neck till dead’: Bom HC confirms death sentence in a rarest of rare cases for committing rape and murder of a 3-years 9-months old child