Prof. (Dr.) Aditya Tomer, Additional Director, Amity Law School, Noida, warmly welcomed the guests. He emphasized on the importance of NHRC in bringing about the change in human rights in various areas of operations in India. He thanked NHRC for partnering with Amity Law School, Noida to organize such an event that brings forth meaningful interactions between the dignitaries and the students, thereby giving the students an opportunity to learn about the ongoing challenges in the field of human rights.

Prof. (Dr.) S.S. Singh, Dean, Faculty of Law, Adviser, ALS, AJA, ALF, AUUP, gave his opening remarks and extended his warm welcome to the dignitaries. He said that this training programme will give an opportunity to all the students to learn the various dimensions of NHRC. He mentioned that Human Rights cannot exist in vacuum and they must be protected, as in the absence of effective remedies, the rights have no meaning. He shared his views on the importance of Rule of Law in ensuring law and order in the society which in turn is essential for protecting the Human Rights.

Prof. (Dr.) Dilip Kumar Bandyopadhyay, Chief Adviser (FPO, Amity Group), Chairman-Amity Law Schools, also addressed the gathering and expressed his views on the importance of Human Rights. He said that the law graduates are the only one who can bring a change in the world. He quoted Dr. Ashok K. Chauhan, Hon’ble Founder President Sir, where he says that ‘A nation is built through the process of education and the process of transformation’. He congratulated the organizing committee for their efforts for successfully organizing the training programme.

Guest of Honour Mr. Bharat Chugh, Partner Designate, Luthra and Luthra Law Offices, began his address with a beautiful quote by Wordsworth. He shared an anecdote from his personal life when he was working as a young judge highlighting the enormity of his designation while giving a judgment and taking care of the human rights as well, which he summarized beautifully in the form of a short poem. He reinstated that each decision made as a judge upholds someone’s rights. He also related lawyers to social engineers, giving the example of an increase in Pro-Bono cases and increasing social responsibilities of law firms.

Guest of Honour Mr. Sushant Sinha, Senior Anchor and Deputy Editor, India News, brought a fresh point of view, highlighting the importance of having different perspectives on the topic of Human Rights. He pointed out that Human Rights violation will stop only when people start understating humanity, irrespective of the number of laws on the subject. He concluded with his best wishes to the students for their future endeavours.

Guest of Honour Mr. Amod K. Kanth, Eminent Social Activist, Founder, Prayas Juvenile Aid Centre Society and Former DGP (Goa), pointed out that the words ‘rights’ and ‘needs’ are synonymous, which is also the motto of his NGO. He discussed the experiences from his varied career, emphasizing the role of the police in protecting the rights of the vulnerable section of the society. He encouraged students to participate in legal aid camps, thereby helping in spreading awareness about Human Rights.

Prof. (Dr.) Balvinder Shukla, Hon’ble Vice-Chancellor, Amity University Uttar Pradesh, warmly welcomed everybody and was overwhelmed by the galaxy of eminent personalities around her. She reinstated the philosophy of ‘Vasudeva Kutumbakam’ i.e. to make one family and to work towards a violation-free society. She appreciated the efforts of the Organizing Committee for successfully conducting a training programme on such an important topic.

Ms. Vaishali Arora, Assistant Professor, Amity Law School, Noida and Convener, of the training programme proposed the Vote of Thanks. This was followed by the National Anthem. 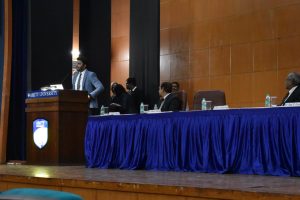 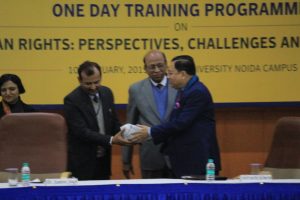 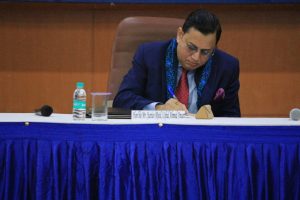 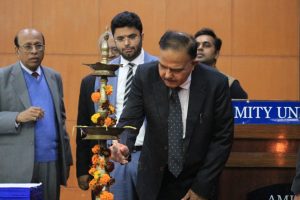 Dr. Ranjit Singh, Joint Secretary (P&A), National Human Rights Commission, distinguished keynote speaker warmly welcomed and took privilege to stand on behalf of NHRC to address the gathering. According to him Human Rights is a wholesome exercise. 21st century is the century of the human rights which needs to be taken forward by the young, dynamic and eager leaders. Jagarukata i.e. common man demanding his rights is the key force driving such rights. Media, social networking and literacy rate also play a crucial role in making human rights prevalent today. These rights are nothing but the aspiration of a common man which revolves around justice, equality and efficient mechanism. He threw light upon the growth of human rights summarizing the domestic and world arena. He elaborated the four generations of human rights initiating from Civil and Political rights to Information Technology that seeks momentum in today’s world. The challenges and initiatives taken by NHRC in overcoming them were beautifully presented by him. He concluded by highlighting the responsibility of the demographic dividend that is the youth and the potential that ought to be channelized in the right direction.

Hon’ble Mr. Justice (Retd.) Iqbal Ahmed Ansari, Acting Chairperson, Punjab State Human Rights Commission, believes that human rights are equivalent to justice and thus, they should be regarded as important. Somebody needs to act upon these rights and that is what the NHRC aims at. Illustrating the famous Salman Khan hit and run trial he pondered over what justice is and in conclusion held that justice ultimately has to be one and is done only when consistent with law. He defined law as merely a collection of the norms in a society. He mentioned that law however is not static; it either consciously or unconsciously changes as the society evolves. For a better understanding of unconscious change in law, he illustrated the evolution of medical evidence and status of marital rape. He firmly believes that animal existence is no existence. A human being must have basic human rights in order to enable him to live with dignity.

Prof. (Dr.) S.S. Singh, Dean, Faculty of Law, Advisor, ALS, AJA, ALF, AUUP, proposed the Vote of Thanks. This was followed by the felicitation of the esteemed panelists. 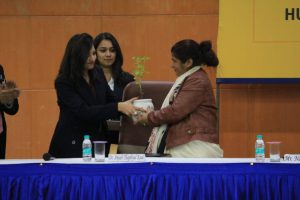 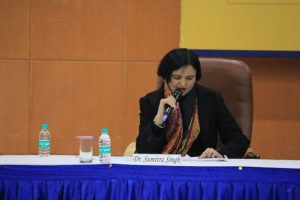 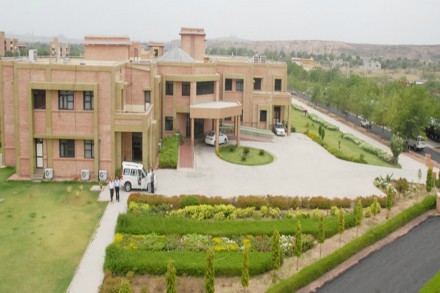 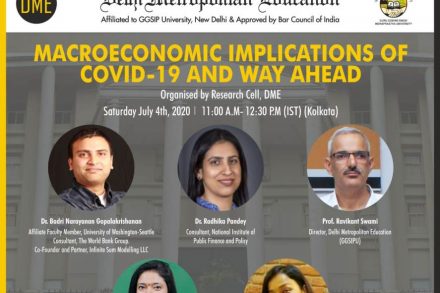